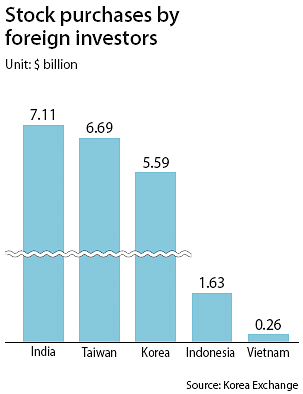 The Korean stock market continues to be a popular one for foreign investors, with a report Monday showing Korea ranked third among major Asian bourses, excluding those of China and Japan, in terms of foreign investment.

According to data from the Korea Exchange, the local stock market operator, foreign investors in the first four months of this year bought $5.59 billion worth of Korean stock. It was the third-highest amount after India, $7.11 billion, and Taiwan, $6.69 billion.

China and Japan were excluded from the report because specific data on foreign investment is not made publicly available.

“We have studied the impact that foreign investors have in the Asian stock markets starting from 2011, and we have found that they play significant roles in deciding the indexes not only in Korea but also in other Asian countries, excluding China and Japan,” said Shin Kwang-sun, a director at the Korea Exchange.

“The data showed that when foreign investors net purchased Asian shares, the indexes also gained except for one or two years in the past seven years.”

The Korea Exchange said that markets where foreign investors purchased a large amount, including India, Indonesia, Korea and Taiwan, saw their shares go up 7 to 14 percent on average during the first four months of the year.

Thailand, on the other hand, had relatively fewer foreigners investing in its stock markets, and their indexes only rose by 1.5 percent.

Asian markets overall have been performing very well this year. According to the report, Hong Kong’s shares rose by the most this year, 16.7 percent up to May 24 compared to the end of last year. This was followed by the Philippines with 14.6 percent and Korea with 14.4 percent.

China was the only country in Asia that saw its main bourse drop 1.3 percent.

Experts believe Korea’s main index, the Kospi, will continue to perform well and that foreign investors will remain purchasers throughout the year.

“The Kospi rose 3.3 percent last year, and foreign investors have been purchasing a large amount of shares starting in October after companies’ third-quarter performances were announced,” said Seo Seung-bin, an analyst at KTB Investment & Securities.

“Foreign investors net sold 4.4 trillion won [$3.9 billion] worth of stock on the Kospi in 2015, but they net bought 10.8 trillion won in shares last year. Foreigners net purchased more than 9 trillion won during the first five months of the year, which is growing two times faster than where it was last year, and we expect that they will remain buyers for the time being.”