E-Mart vows to tap small firms for No Brand

E-Mart vows to tap small firms for No Brand 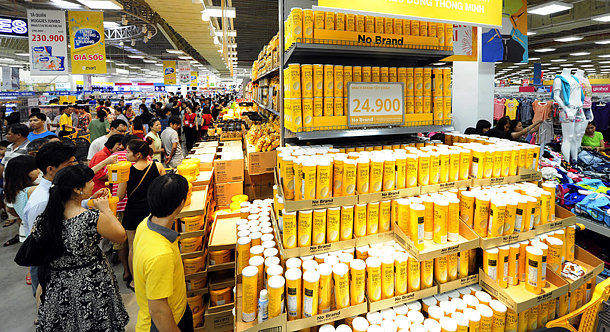 Potato chips from E-Mart’s in-house label No Brand are sold at the discount franchise’s Go Vap branch in Vietnam. [E-MART]

E-Mart pledged to use more products from small and midsize firms for its in-house No Brand line after receiving criticism for expanding its retail outlets to small neighborhoods.

The discount chain said Monday it would increase the portion of products manufactured by small and midsize firms in its No Brand line to counter the criticism it’s received for hurting small businesses.

“E-Mart is going to raise the portion of small and midsize companies’ products from last year’s 60 percent to 70 percent until the latter half of this year,” the company said.

“We are going to maintain the 70 percent portion after the year 2017 as well,” it added.

The company also said it would double the number of small manufacturers that produce items with annual sales of more than 1 billion won ($890,000).

The company said it would take charge of design, sales and marketing. E-Mart said it would help these companies advance to foreign markets as well. The company exported 375 products of its No Brand line last year to eight countries, including China, Vietnam and Mongolia. It generated 4.3 billion won from the exports.

“No Brand is going to expand the foreign market to 15 countries this year as well as the export volume to 10 billion won,” the company said.

Conglomerates’ ambitious expansion in small neighborhoods has been condemned for hurting small supermarket outlets, which rely heavily on local consumers.

“Conglomerates are taking over large discount stores, supermarkets and even convenience store business,” Kang Kab-bong, head of Kosamart said on May 23 at a press conference.

“Local business is destined to die out if they continue to compete with the cheaper prices of No Brand. The government has to come up with regulations that can protect local businesses,” he added.

E-Mart’s No Brand launched in 2015. It carries daily supplies, food and even electronic products at some of the industry’s cheapest prices by minimizing unnecessary costs such as packaging and advertising.