FTC cracks down on unfair rules for franchisees

FTC cracks down on unfair rules for franchisees 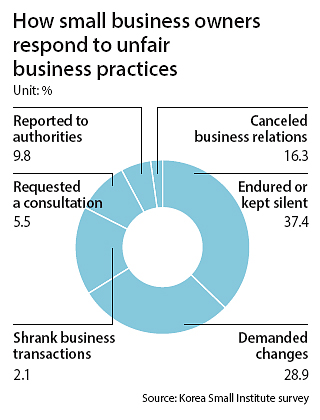 A 50-year-old man, who wished to be identified only as Kwon, ran a franchise pizza shop for more than five years.

However, while running the pizza shop he said he has been under intense pressure from the franchise headquarters including about the ingredients he is required to purchase.

“I thought I was getting the ingredients [for the pizza] at a wholesale price from headquarters but it turned out some were more expensive than the neighborhoods’ supermarket,” Kwon said.

He also was forced to pay between 200,000 and 300,000 won ($178 to $268) every month for leaflets that he had to post in the neighborhood, even when apartment complexes in the area ban the distribution of promotional leaflets.

Kwon said if he refused headquarters’ orders, management would visit the store every two to three days for inspections that disrupted his business.

Finally, he gave up the store last year and has been working at a restaurant as a temporary employee since.

The Fair Trade Commission has taken a stronger stance against franchises’ unfair business practices on franchisees. One of which is creating a clause that would prevent franchise companies from retaliating against franchisees. Under current law, there’s a clause that prevents bigger companies from taking such actions against small-business suppliers. However, there are no similar bans on regulations in regard to franchise businesses.

The FTC reported the intentions to the presidential advisory commission on state affairs planning last week. The FTC’s new commissioner nominee, Kim Sang-jo, has said cutting malpractice against small businesses including neighborhood stores is his priority.

In the last 10 years, reported conflicts between franchise companies and the franchisees have nearly tripled.

According to the FTC, there were 212 cases requesting mediation in related conflicts. That figure rose to 593 last year.

Unreported damages that the franchisees have suffered are expected to be larger.

According to a survey by the Korea Small Business Institute with 2,055 small-business owners, 37.4 percent said they have endured or kept the unfair treatment that they experienced silent.

Of that number, 62.4 percent said they kept it to themselves in fear of retaliation.

The FTC said it was confident that if it creates a clause that bans retaliation and strengthens its regulations against franchise companies, the number of reports will increase significantly.

However, the problem that the FTC faces in solving these conflicts is the lack of manpower.

Even today, it takes more than two years when the conflict moves up to direct investigation by the FTC.

Because of a small workforce at the FTC, some have been arguing the need of expanding the investigation rights to other institutions including local governments.

“One of the promises that President Moon Jae-in made during the campaign was to promote the Small and Medium Business Administration into an independent government department and once this is realized the investigative and mediation rights should be given so that it could use its regional offices that would not only raise the accessibility of the investigation but also cut cost and time,” said Chung Soo-jung, a researcher at Korea Small Business Institute.

There have been growing demands that franchise companies need to be more transparent on the prices of the mandatory ingredients that the franchisees purchase.

“There’s no clear standard on selecting mandatory items and it is unclear as to how much the headquarters takes in profit under what reasons,” said Kim Tae-hoon, director of an association representing franchisee owners. “Information on the reasons why certain items are selected as mandatory and how much the headquarters and its affiliates profit from in the process as well as contracts with franchisees should be made public.”

Lee Jung-hee, an economy professor at Chung-Ang University said the government’s policy should be focused on straightening unfair practices without harming the growth of the franchise industry.