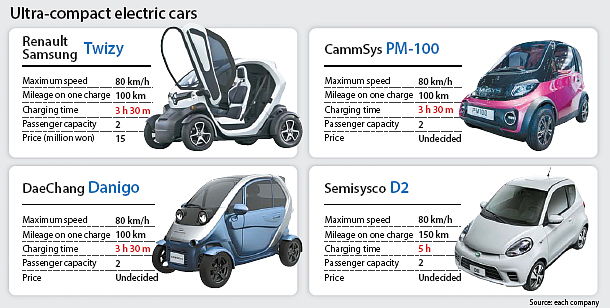 Daechang Motors, an automaker based in the rural county of Jincheon in North Chungcheong, has made small electric vehicles its bread and butter. The company manufactures golf carts and wheelchairs powered by electricity, and it believes this is the mobility of the future.

“With our expertise in electric transportation means, we’re aiming to take the lead in the ultra-compact electric car market in this year’s second half,” said Jeon Byung-yoon, a senior executive at Daechang.

As electric cars slowly become the norm, the market segment for vehicles powered by electricity is diversifying. It’s no longer just about high-end models like Tesla’s Model S and Hyundai’s Ioniq but also ultra-compact cars that hold two passengers, and local manufacturers are gearing up for tough competition.

The market for two-person EVs is expected to start growing this year after the Ministry of Environment in January set safety regulations for ultra-compact EVs and fixed the subsidy at 5.8 million won ($5,180). The financial aid for consumers to buy small EVs could climb even higher if one includes those offered by local governments.

Ultra-compact cars are smaller than a sedan but larger than a motorcycle. Electric ones can run up to 100 kilometers (60 miles) on a single charge and speed up to around 60 to 80 kilometers per hour. Performance-wise, they are similar to a small motorcycle or scooter but offer more comfortable travel and storage space than two-wheelers, making them ideal for patrol, delivery or as a household’s second car. With subsidies offered by the government, ultra-compact EVs can be purchased for around 5 million won.

“The core question of who gains the lead in the ultra-compact EV market will depend on how practical the car is in real life,” said Kim Pil-soo, a professor of automotive engineering at Daelim University.

Practical or not, use of EVs is increasing. Last month, the number of electric vehicles registered in Korea surpassed 13,000 for the first time, according to statistics from the Korea Automobile Importers and Distributors Association. This is a 27 percent increase compared to December.

Local electronics makers are keenly aware of the market’s high potential. CammSys, originally a manufacturer of camera modules for cellphones and car components, acquired a 30 percent stake in electric car maker Cony Motor in 2015. At last month’s Seoul Motor Show, the company unveiled the PM-100 electric vehicle, which is set for release during next year’s first half.

Daechang Motors’ flagship vehicle is the Danigo. The ultra-compact car comes with swanky features like cameras all around the vehicle and a self-driving controller. Its core components were developed with Chungbuk National University, and the controller for the self-driving mode was made in-house by the company.

Semisysco, another local company that is hoping to compete against Daechang, originally built inspection facilities for semiconductor factories but earlier this month established a mass production line for electric cars in Sejong City capable of producing up to 3,000 to 4,000 electric vehicles a year.

The local manufacturers plan to price their products at around 14 to 15 million won. Their biggest competitor will likely be Renault Samsung Motors’ Twizy. The two-person electric vehicle can run up to 80 kilometers per hour and go 100 kilometers on a single charge. The price is a reasonable 15 million won.

“The Twizy is favored by young drivers living in the city,” a Renault Samsung spokesman said. “The model has already proven successful in the European market, so we’re keeping hopes up that its popularity will continue in Korea as well.”

The Twizy, which was first released globally in 2012, will hit the Korean market next month.