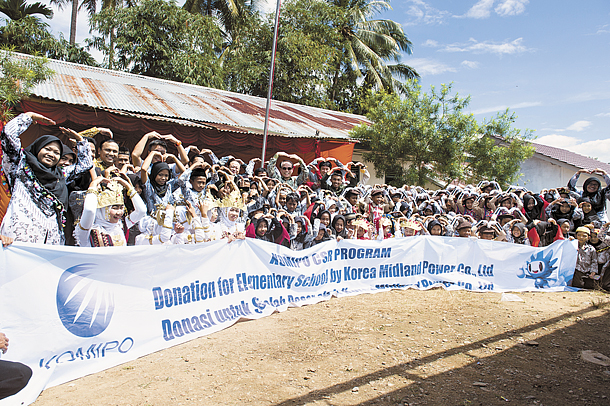 The Korea Midland Power Company has contributed to building schools in Indonesia. [KOMIPO]

The Korea Midland Power Company (Komipo), a state-run electricity supplier, is focusing its corporate social responsibility activities on generating happiness among the people as the company believes happiness is tied to its core business.

Biding by this principle, Komipo has realized a series of outstanding achievements and milestones in the nation’s power generation history.

Prior to and after Komipo relocated its headquarters from Seoul to Boryeong in South Chungcheong, the company has been providing many services to the local residents of Boryeong in an effort to contribute to the well-being of the region.

Through its efforts, Komipo is pursuing a mission of spreading light and hope. The company continues to make contributions to the dynamic and sustainable prosperity of the entire village. The charitable activities include volunteer groups dedicated to assisting citizens in need of help and advancing residents’ quality of life.

Komipo has also set out to expand the capacity of electric power generation overseas. The company has been seeking projects abroad to deliver its corporate value to local people around the world. Komipo, as a Korean state-run power company, is looking internationally for success and pushing its vision of overseas business expansion to become a global brand in power supply. Komipo has sets its sights on the Indonesian energy and power market to lay the foundation for the company’s overseas expansion drive.

Komipo is actively encouraging corporate social responsibility activities to serve the people and local community and enhance partnerships with public and private companies. Through its services in Indonesia such as building schools and other projects, Komipo has earned a good reputation in the Southeast Asian island nation.