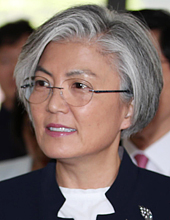 Foreign minister-nominee Kang Kyung-wha apologized Monday for an ethics breach jeopardizing the fate of her conformation, as opposition parties vowed to stop the appointment.

“I am extremely sorry that my thoughtless action, taken in 2000 for my daughter’s well-being, caused various problems,” Kang said, as she explained about the usage of a fake address to help her daughter get into a better high school.

President Moon Jae-in named Kang to be Korea’s first female foreign minister last week. The Blue House made a rare move by revealing that the senior United Nations diplomat was chosen for her abilities even though the vetting process revealed the fake address registration.

“The eldest daughter studied in a high school in the United States for one year and then transferred to the Ewha Girls’ High School in 2000,” Cho Hyun-ock, senior presidential secretary for personnel affairs, said last week. “For one year, the daughter was registered as a resident of a relative’s house.”

The JoongAng Ilbo, however, learned that the address used for the high school admission does not belong to Kang’s relative. According to a report Kang submitted to the National Assembly on Friday for the confirmation hearing, the address used was Jeongdong Apartment unit 502 in Jeong-dong, Jung-gu, Seoul, in 2000. The JoongAng Ilbo learned that the tenant at that address was the school’s principal, who rented the apartment in 1994 and was still registered as its tenant in 2000. The principal was the tenant until Aug. 21, 2008, after which the high school’s foundation took over the lease, which expired on Sept. 30, 2010.

The registration of a false address to get one’s children into elite schools has frequently stopped nominees from taking top government posts, and is a crime punishable by up to three years in prison or a fine of up to 10 million won ($8,898) under the Resident Registration Act.

During his presidential campaign, Moon named five types of corruption that he would not allow when making appointments for senior posts: draft-dodging, real estate speculation, tax evasion, fake address registration or plagiarism.

It was also revealed that Kang’s daughters purchased a home together in 2014 with money given to them by their parents. By law, the tax must be paid within three months, but the daughters did not pay it until May 23, two days after Kang’s nomination.

Kang said Monday she wanted her daughter to go to her alma mater for a smooth transfer from their relocation from the United States and her former teacher offered the address in question. “But I did not know who was living there or who owned the apartment,” Kang said.

She, then, said she was in a UN trip to Geneva when the Blue House was conducting the vetting. “The Blue House appeared to have contacted my husband while I was having meetings and returning to New York,” she said. “He had no role in the address change, and I did it alone as a mother. When the Blue House was asking about it, he just replied that it was a relative’s house without seriously treating the matter. But it was not a relative’s house, and I want to explain what happened.”

It remains to be seen if the explanation will persuade the opposition parties. Rep. Chung Woo-taik, the floor leader and acting chairman of the main opposition Liberty Korea Party, said Kang is unfit for the job for many reasons.