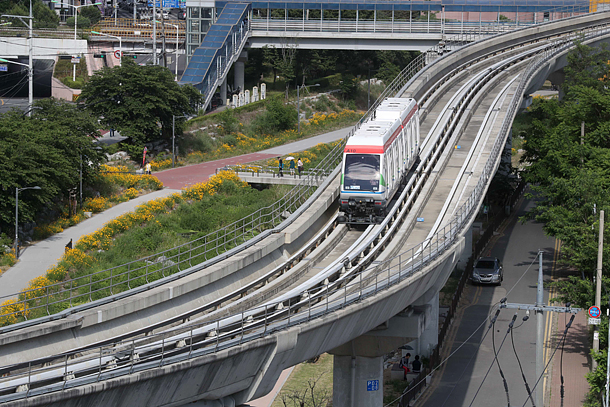 A train operates on the Uijeongbu light rail line on Friday. The Uijeongbu Light Rail Transit Company was pronounced bankrupt the same day by the Seoul Bankruptcy Court. The company’s debt amounts to some 360 billion won (320.6 million dollar). [KIM SANG-SEON]

The local court pronounced the Uijeongbu Light Rail Transit Company officially bankrupt on Friday, after the company ran up about 367.6 billion won ($327.9 million) in debt since its establishment nearly five years ago.

“The Uijeongbu Light Rail Transit Company’s debt has surpassed its assets [220 billion won] and the rail line no longer provides a service of value,” said the Seoul Bankruptcy Court in its ruling on Friday. “It also failed to find a solution to address further losses down the road.”

The company filed bankruptcy in January.

The Uijeongbu Light Rail Transit Company was established in July 2012 with government and private investments, and is the first such public-private enterprise to go bankrupt here. The light rail trains, smaller in size and shorter than subway trains, run 11.1 kilometers (6.9 miles) from Balgok Station to Tapseok Station on the Uijeongbu Line, or U Line, in Uijeongbu, Gyeonggi. The line was expected to draw nearly 80,000 commuters a day in its first year, according to figures obtained by the company from a consulting agency, but it drew only around 12,000 per day. 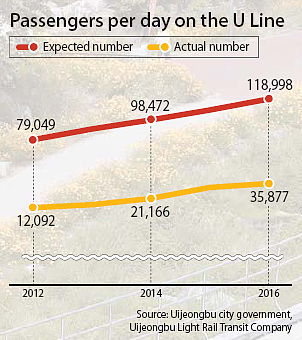 “The Uijeongbu Light Rail Transit Company was the result of unrealistic planning and hopes of creating a publicly and privately invested enterprise,” said Lee Ui-hwan, the policy director of a civic group that is demanding an investigation into what went wrong with the enterprise. “The company’s management structure was so inefficient in that it completely relied on the profit from the passengers to pay back the investments.”

The establishment of the Uijeongbu Light Rail Transit Company and its operations were led by the Uijeongbu city government, which gathered investments from private entities.

In May and November 2014, the Uijeongbu city government tried to boost the number of passengers by holding events, providing free transportation for older adults and giving discounts to those transferring from other means of public transportation. But after nearly five years of operation, the U Line drew only 30 percent of its initially expected traffic.

“The government made a mistake in expecting more than the usual number of passengers for its rail line,” said Kim Dong-seon, a professor of traffic science at Daejin University in Pocheon, Gyeonggi. “Usually, only 10 percent of the city’s population uses a light rail transit. So in Uijeongbu’s case, it should have expected that about 44,000 people would use the line daily, instead of twice that amount.”

Although the court has pronounced the light rail transit company bankrupt, it will continue operating until the city government announces another means of running the railway.

“The city government will either run it itself or find another developer who can take charge,” said Uijeongbu Mayor Ahn Byung-young in a press conference on Friday.

If the city government decides to run the railway operations itself, then it will have to pay for the annual operations cost of 5 billion won as well as the 220 billion won fee to the private developer for terminating the contract.