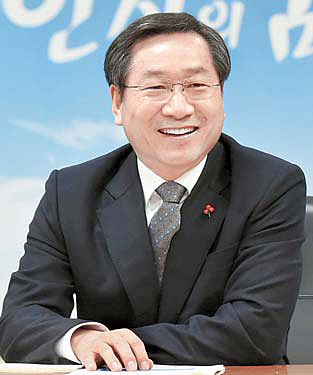 Incheon Mayor Yoo Jeong-bok during an interview with the JoongAng Ilbo. [JOONGANG ILBO]

The FIFA U-20 World Cup currently being hosted in Korea has been getting attention all across the globe. Twenty-four teams comprising young footballers under the age of 20 have been competing for the top spot of U-20 champion.

Yoo Jeong-bok, the mayor of Incheon, is proud of the preparation his city has done for the event, which hosted the early Group F matches.
“Including myself as mayor of Incheon and with the help of officials, we have done our best to make operations smooth and perfectly ready for the games,” he said, “while also helping the nation’s players deliver their best performance.”

The organizers, he said, have been working hard to successfully host the U-20 World Cup, actively promoting the event, selling tickets and enlisting the help of some 1,300 volunteers. The central government and the city of Incheon, he said, have put great effort into upgrading the city’s infrastructure to ensure a perfect event.

Mayor Yoo expects the U-20 World Cup to have a positive effect on the local economy. In addition to the short-term profit reaped during the games, the event will put Incheon on the map as a destination for tourism and hospitality. Yoo said hosting the international event will also boost Incheon’s brand value in the coming years.

The mayor also believes there are numerous intangible benefits for the citizens of Incheon. Young football amateurs have been working at the event and developing their skills. Yoo encourages the public, especially Incheon residents, to take an interest in the U-20 World Cup and follow the tournament because the future of Korean football will be on display.
“I hope our citizens won’t miss out on the U-20 World Cup.”