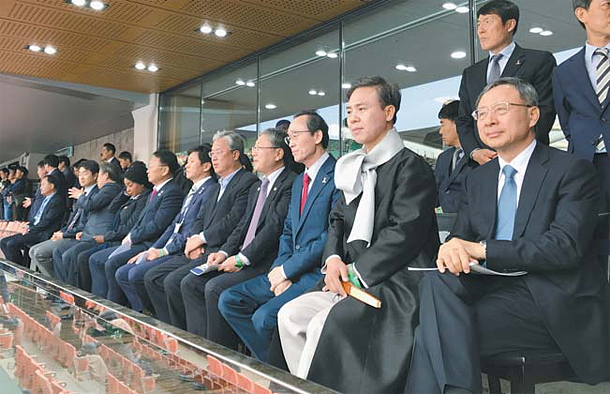 Kim Seung-su, the mayor of Jeonju, (second from right) and Song Ha-jin, governor of North Jeolla, attend the opening match of the U-20 World Cup. [NORTH JEOLLA PROVINCE]

Seung-su Kim, the mayor of Jeonju, North Jeolla, has announced his plans to make the city, known as the capital of Korean traditional culture, into an internationally-recognized World Cup host city. Many had expected cities like Seoul and Ulsan, known for their convenient commercial facilities and public transportation, to be picked as host cities for the 2017 FIFA U-20 World Cup, and Koreans were surprised to hear the news that Jeonju was selected to host the opening match of the FIFA U-20 World Cup.

The mayor of Jeonju, during an interview with Joongang Ilbo, said that he pushed for the city to hold U-20 World Cup games for the uniqueness that Jeonju preserves, while mentioning that he wants Jeonju’s distinctive Korean cultural features to make an impression to a global audience. In addition to his belief that hosting FIFA U-20 World Cup games can help spread Korean culture around the world, the mayor also believes that it can have a very positive influence on the local economy.

Jeonju, with a population of just 670,000, was able to beat out bigger cities like Seoul and Ulsan because of its unique traditional culture and its passion for football. Home to the passionate fans of Jeonbuk Hyundai Motors FC, who fill Jeonju World Cup Stadium each week to cheer on their team, Jeonju has developed a reputation as one of Korea’s most enthusiastic football cities. The packed stadium at the opening match of the tournament between Argentina and England put the city’s enthusiastic spirit on display for the world to see.

The mayor said that after the World Cup, he hopes to improve the public’s perception of even the unpopular areas of Jeonju. He wants to improve the daily lives of citizens by updating accommodations and amenities and developing tourist attractions by using its history and cultural resources to represent Korea’s culture.