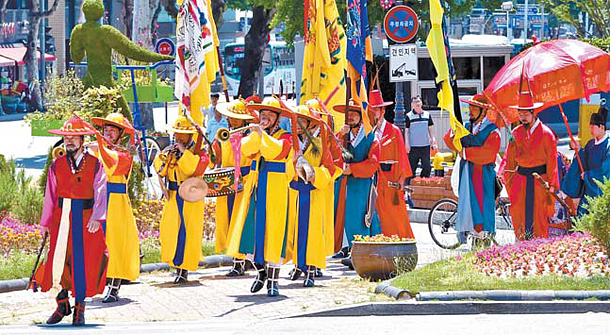 The city of Suwon in Gyeonggi has prepared various cultural events, including a royal parade, in tandem with the FIFA U-20 World Cup. [SUWON CITY GOVERNMENT]

The city of Suwon in Gyeonggi has a long legacy of football. It is home to the Suwon Samsung Bluewings, Suwon FC and the Suwon City Facilities Management Corporation’s Women’s Football Club. It previously hosted the 2001 Confederations Cup, 2002 World Cup and 2007 U-17 World Cup.

Now, as Suwon prepares to host the final match of the FIFA U-20 World Cup, Yeom Tae-young, the mayor of Suwon, sits down to talk about the role of football in the city’s life.

Q. What does hosting the U-20 World Cup mean to Suwon?

A. With this year’s U-20 World Cup, Suwon has hosted all four major FIFA games. It is even more special because Suwon is the second city to host all of them, after Mexico City, and the first one to do so in Asia.

During the U-20 World Cup, Suwon is serving as the operational headquarters that facilitates all the matches. The final match of the competition will be held at Suwon World Cup Stadium. We hope to let the world know about Suwon, the mecca of football.

How have you prepared for a successful U-20 World Cup?

First, we renovated Suwon World Cup Stadium into a user-friendly space for both players and football fans. We replaced the grass, installed eco-friendly LED lighting and built a separate space to train referees. Players can hold their matches in an ideal environment.

We also created a website for the U-20 World Cup in order to communicate with visitors and citizens. To help foreigners visiting Korea for this occasion, we updated the translation app for touring Suwon. We have also made sure that visitors will have no problem finding accommodations, food and transportation.

Can you tell us more about the various events going on during the U-20 World Cup?

Suwon will host 10 matches in total. On each game day, we will present cultural events like royal parades, taekwondo performances and dance performances. We have also prepared events that represent the tradition and culture of the country competing that day.

Those with U-20 World Cup tickets can receive discounted entry to the Suwon Hwaseong Fortress, museums and art galleries. They can also get discounts for the fortress trolley, various accommodations and Flying Suwon, which allows you to see stunning views of the city from the air.

The Korean national team won the opening match. Do you have any words of encouragement?

As a football fan, I appreciate their well-earned victory. The Korean people are yearning for the national team’s success during the matches, especially since Korea is hosting the games. I hope to see our national team stand at the podium with a gold trophy on June 11.