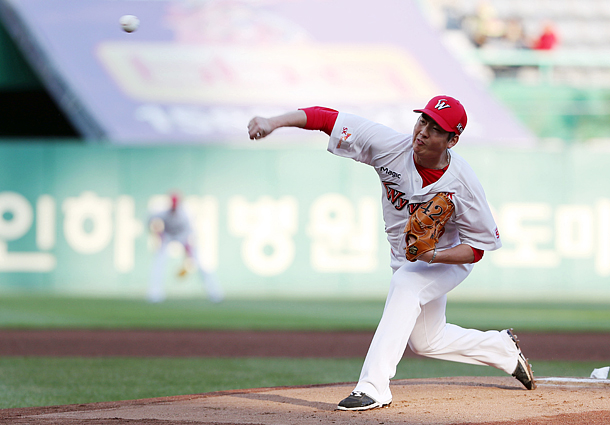 Moon Seung-won, the SK Wyverns’ starting pitcher, is living up to all expectations. Prior to the start of the 2017 season, Trey Hillman, manager of the Wyverns, selected Moon as its fourth starting pitcher to replace their ace pitcher, Kim Kwang-hyun, who is absent due to an elbow injury.

“Since spring camp, I classified him as a starting pitcher,” Hillman said. “He is good at throwing four different types of pitches. I thought he could get on track to be top pitcher if I gave him a shot.”

Moon got off to a shaky start, recording one win and four losses with an ERA of 6.64. During the Wyverns’ game against the Samsung Lions in Incheon on May 16, he tossed 120 pitches for six innings, allowing five runs. But after the Lions game, Moon returned as a new pitcher.

He won two consecutive games, against the NC Dinos on May 21 and against the LG Twins on Saturday, pitching six scoreless innings. Just by looking at Moon’s record in two games, he gave up seven hits with 12 strikeouts, pitching 12 innings and Moon lowered his ERA to 5.17.

What follows is an interview Moon recently gave with Ilgan Sports. 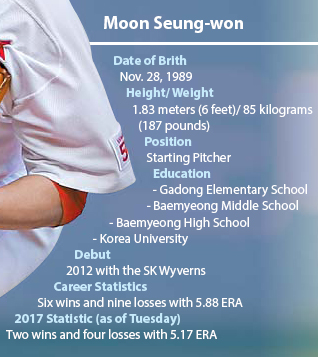 Q. Your record has shown significant improvement in recent games - what is the difference from what you did in the beginning of the season?

A. I think our game against the Doosan Bears on May 10 was the starting point. During the game, I gave up three runs in one inning and got off the pitching mound. Once I got off the mound, Choi Sang-duk, our pitching coach, called me over to the dugout and said, “If you really want to become a good pitcher, you need to be able to calm yourself on the mound.”

After, when I was sitting at the warm-up zone at Jamsil Baseball Stadium, he came up to me again and held my hand for about ten seconds. At that moment, I got calm.

Choi told me to speed up my pitching tempo since there’s nothing I can do once the ball leaves my hand. And that’s when I started to change. Though I still lost a game after that, against the Samsung Lions, I was already improving.

A lot of the people still think 120 pitches against the Lions was a kind of punishment. How did you feel about it after the game?

I never thought of it that way. Since the starting pitcher plays in a game every five days, we should be able to throw about 120 pitches. Rather than punishment, I felt like coach gave me another opportunity to develop.

You pitched in six innings in four of your recent games. Where do you think you’re at now?

I’m not sure when I’m pitching well, but when I’m not, I still struggle. That said, I was only able to throw six innings because my team and head coach had a great game.

The number of walks have been significantly reduced. What kind of changes did you make?

I got more aggressive with my pitching. Coach didn’t directly ask me to be more aggressive, but I read an article that said, “I want him to throw more qualifying strikes.” After, I talked a lot with the pitching coaches, Dave Jorn and Choi, to make improvements.

You got substituted after throwing 88 pitches against the LG Twins on Saturday. What were your thoughts regarding that?

When I went back to the dugout after the sixth, coach told me that although I only tossed 88 pitches, there were three crucial situations that could have damaged me. I was thankful for his consideration.

Do you feel overwhelmed by such high expectations that Hillman, the head coach, has of you?

No, but as he is giving me more opportunities, and I want to be better quicker. The more I play, the faster I want to repay to his trust. I feel bad for getting off track earlier in the season.

How did you feel in the beginning of the season?

When I wasn’t playing well, Lee Jae-won, our catcher, told me so, but the content of my game has been improving. He also said that up until last year, it seemed like I was pitching thoughtlessly, but now, I look like I have some thoughts in my head when I’m on the mound. Once I heard that, I tried to maintain my routine without thinking about the result.

Was there any influence when you played for Sangmu Baseball team?

When I was serving my time in the military, I got really close to Kim Sang-su of the Nexen Heroes. He worked really hard while in the military. He advised me, “You can’t expect yourself to play well every time. But even on your bad days, you should keep on doing what you’ve been doing.” I got a lot of help from a great senior player and from a head coach at the Sangmu baseball team, Park Chi-wang.

Was there a change in your goal for the season as you played in more games?

Above all, my goal is to play fulltime without getting any injuries. I’ll be preparing each game with the goal of playing at my best, although I can’t always have a perfect game.