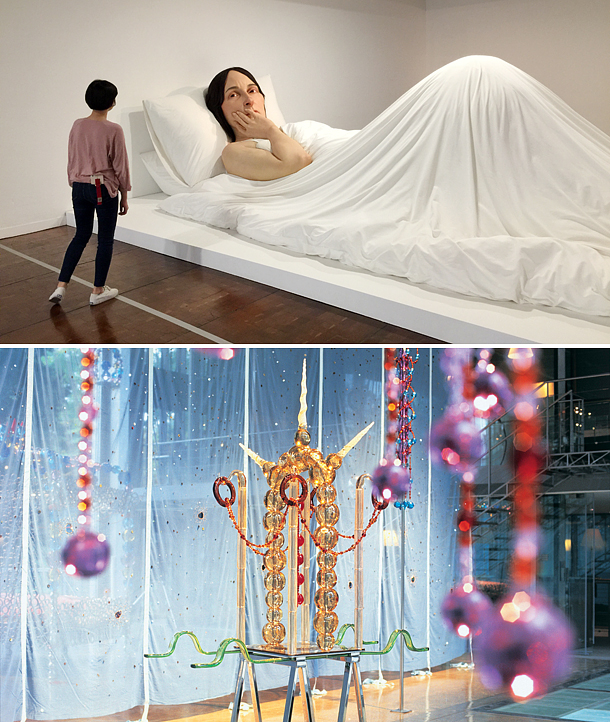 Australian artist Ron Mueck’s hyper-realistic sculpture of a woman, top, and French artist Jean-Michel Othoniel’s sculptures of blown glass, bottom, are part of the first-ever tour exhibition of the Fondation Cartier outside France at the Seoul Museum of Art. [SEOUL MUSEUM OF ART, MOON SO-YOUNG]

Many of the world’s major luxury brands have their own foundations to support the arts. In a new exhibit, French luxury brand Cartier highlights the characteristics of its art patronage - the focus on living artists sensitive to the world’s contemporary issues; encouragement of their activities through commission of new works rather than purchasing existing works; and interdisciplinary collaborations.

The first-ever tour exhibition of the Fondation Cartier pour l’Art Contemporain outside France started at the Seoul Museum of Art (SeMA) in central Seoul on Tuesday under the title “Highlights.” Co-curated by the French foundation and Korean municipal museum, it features about 100 works from Fondation Cartier‘s collection, which consists of 1,500 pieces by artists from more than 50 countries in total.

Interdisciplinary collaborations are an important part of the show. Among them is “EXIT,” an immersive six-channel video and sound installation by Diller Scofidio + Renfro, a studio of artists, designers, architects and scientists. It shows the world’s migrations for political, economic and environmental reasons through pictures, data visualizations and text, based on the renowned French philosopher and urbanist Paul Virilio’s theories. This is one of the highlights of this “Highlights” exhibition.

“This exhibition is part of our efforts to narrow the gap between the public and contemporary art,” Choi Hyo-joon, general director of SeMA, said at a press conference on Tuesday. “And I hope it would inspire Korean companies in their patronage of art and culture. Since its opening in 1984, the Fondation Cartier has been a good model.”

“Seoul is a creative city, but a relatively lesser known city to us, though we have already worked with Korean artist Lee Bul,” Herve Chandes, general director of the Fondation Cartier, said in the press meeting. “So we want to discover Seoul - to discover more Korean artists. That’s why we started our tour exhibition in Seoul.”

The tour exhibition, which runs through Aug. 15, will move to Shanghai and other Asian cities later this year, according to the SeMA officials.

Regarding Fondation Cartier’s characteristics, Chandes said, “We work in cosmopolitan and multidisciplinary ways. We open up to the most diverse realms of creation and knowledge from the visual arts to design, sciences, and cinema. And we focus on discovery, in particular by revealing young artists to the public or by unveiling an unexpected side of world-renowned artists.”

“In many cases, we commission artists to create works for speciallythemed exhibitions and then purchase them so that the collection becomes the memory of our past exhibitions,” he added.

As for exhibitions of individual artists, their themes are up to the artists, while the foundation encourages them to push ahead with their ideas, he said.

Lee said in the press conference, “My 2007 solo exhibition commissioned by the foundation enabled me to start ‘Mon Grand Recit (My Great Tale)’ series, which I had conceived several years before but had difficulties in actualizing [due to its scale and cost.]”

“So every piece of work [for the solo show] was new and cost a lot,” she continued. “I was worried beforehand and tried to compromise by installing fewer mirrors that were needed for a work. Then, Herve told me the work needs more mirrors, encouraging me to go ahead with my initial concept for the work.”

Two of the works that were a part of the 2007 exhibition at the Paris building of Fondation Cartier are now a part of the Seoul exhibition. One of them, “Heaven and Earth,” an oversized bathtub filled with dark ink and ringed by snowy mountain ridges, depicts the lake in the middle of Mount Paektu. It is a holy mountain in Korean mythology but few South Koreans can see in person, as it is located in North Korea. The sculpture reflects the ironical reality that the mountain is “a kind of ideal image, almost an abstraction.”

There is also a new three-dimensional film commissioned for the exhibition by famous Korean brothers, film director Park Chan-wook and artist Park Chan-kyong, who work together under the name of PARKing CHANce.