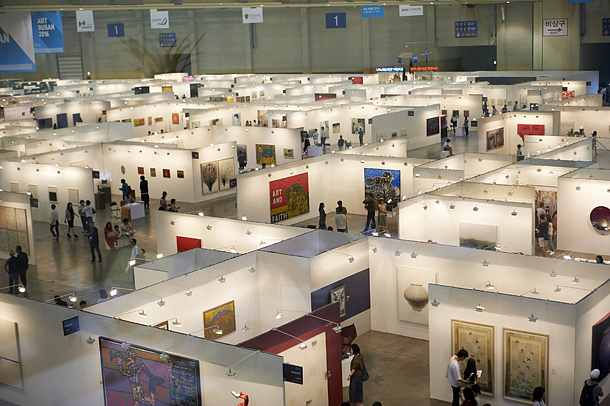 A birds-eye view of the exhibition hall at Art Busan 2016. [YONHAP]

At this year’s Art Busan, an annual art fair that will open on Friday, visitors will see a significantly smaller number of Chinese artworks due to the ongoing diplomatic feud between Seoul and Beijing over a U.S. antimissile Thaad system.

The organizers said the drop in number, however, would be only temporary and that the global event still proves popular among overseas galleries as some 170 galleries from 16 countries, including Galerie Perrotin (Paris), Gallery d’Arte (New York) and Pearl Lam (Hong Kong), will attend.

Sohn Young-hee, president of the organizer Artshow Busan Association Inc., told reporters in a press briefing Thursday that the number of Chinese galleries has dwindled to three from last year’s 15.

“Since the relations show signs of improving, we would have been less affected if the opening had been pushed back,” she said. “Nevertheless, generally speaking, we see a growing interest in the event from overseas galleries, not to mention from Korea’s major art market players.”

Busan, the second-largest city in Korea, has become a magnet for art lovers with an ever-growing base of collectors, especially in the new, expensive residential area of Haeundae.

The 6th Art Busan will take place at the Busan Exhibition & Convention Center (Bexco) from June 2-5, with some 4,000 art pieces on display.

According to Art Director Byun Hong-chul, Korea’s “Minjung Art,” or art of the people in Korean, will be highlighted in a special exhibition, titled “Korea’s Realism; And Today,” which shows some 50 paintings by 10 artists.

In the 1980s, Minjung artists took to the streets, rebelling against the mainstream trend in the country’s art scene that had largely shunned outright political activities. They protested against the repressive government by creating artwork with strong social and democratic messages in it.

The country’s art critics believe the political and populist art genre from the period will succeed “Danshaekhwa,” or monochrome paintings, that have been in vogue for the past few years in and out of the country.