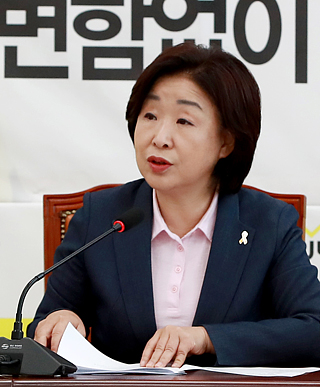 “We dream of a world where the Justice Party is to the left, while the Democratic Party is to the right,” said Rep. Sim Sang-jeung, chairwoman of the minor progressive Justice Party, which won the most votes in the history of the party in the May 9 presidential election. By gaining 6.2 percent of the votes, or 2.01 million ballots, the party won twice the number of votes garnered by Kwon Young-ghil in the 2002 election as the candidate of the Democratic Labor Party.

Though it fell short of reaching 10 percent, which would have given the party government subsidies to cover half its campaign expenses, there is no doubt that Sim has elevated the status of the party while also addressing a topic that had long been considered taboo in conservative Korean society: LGBT rights. What follows is an edited interview with Sim, held at her National Assembly office.

Q. How do you assess the election outcome?

A. After the exit polls came out at 8 p.m. on Election Day, forecasting that I would receive 5.9 percent of the votes, donations for my campaign began pouring in. Over 7,400 people donated nearly 300 million won ($266,751) until 9 a.m. the following day. They wanted to help my party because it became clear that I would fail to win 15 percent, which means the party’s campaign expenses would have been fully covered by the government. I take the people’s massive donations, even after the campaign was over, as a sign of support for what I and my party champion. While it was important to gain a high number of votes, it was equally important to show people what we stand for as a party.

So what does the Justice Party stand for?

We aim to raise the quality of life for the people and build a society that is just and embraces welfare.

Your performances in televised debates attracted many viewers.

It was our first opportunity to let people see how our party differs from the political establishment. Particularly, my remarks in support of sexual minority rights and a welfare society sparked much interest and attention. It was meaningful that throughout the debates, I showed to the people that the Justice Party is not some radical political group, but a party that is capable of running the country.

What direction should the Justice Party take now?

The Justice Party had to fight for its very survival in every election. But this time, we have grown to become a party with the actual ability to lead the country. So our new beginning really starts now. We have set out a new goal of becoming a formidable party in the 2020 general election by achieving negotiating power with 20 party lawmakers.

The National Assembly now has a five-party system.

As long as we have in place an electoral system that has contributed to the two-party system, the current multi-party system will sooner or later face challenges intent on bringing the Assembly back to a two-party system. To prevent that, we desperately need bold reforms in the electoral system, such as the introduction of a wider proportional representation system and run-off elections.

But will the ruling party, which benefits from the current system, agree to this?

Reforming the electoral system is more challenging than amending the Constitution. Every time we called for fixing the electoral system, the political establishment tried to avoid the discussion by saying they would do it, but only as part of a constitutional amendment. So it all comes down to the president’s resolve to push it through. President Moon Jae-in promised during his campaign that he would complete the constitutional revision before the local election next year. So the major parties will not be able to dodge the electoral reform issue this year.

What is the Justice Party’s proposal for the amendment?

President Moon signaled his support for two four-year presidential terms. We, on the other hand, think that it is better to guarantee the basic rights of the people, enhance regional autonomy and reform the electoral system first. A constitutional amendment should complete the mission of the candlelight protests.

In the course of your campaign, you complimented Bareun Party nominee Yoo Seong-min, a conservative.

This came from my desperate wish to drive out the corrupt conservative circle. On social issues, he presented some rational vision as a candidate. But on national security issues, I felt his vision was still stuck in the Cold War era. In the long term, I think the best political scenario is having the Justice Party on the left of the ideological spectrum and the Democratic Party on the right. But a shake-up of the parliamentary landscape should be carried out by the people. For the corrupt conservative establishment, it is better that they be voted out of the Assembly.

One of your pledges was to increase jobs by cutting down on working hours. But it is not clear whether companies or labor unions for regular workers would go along with your plan.

The matter of job creation requires comprehensive work regarding the reduction of working hours, employment and reform of the wage system. In Korea, many workers rely on extra pay while their base wage is very low, leaving them with no choice but to work extra hours.

Some say the problem of irregular workers stems from labor unions’ self-interest.

The problem of temporary workers is not caused by labor unions but by a poor set of laws. Corporations say banning temporary workers will prevent them from hiring more workers, but if there is work to do, it will lead to job creation. Transactional costs incurred by subcontractors should be covered by prime-contractors or major companies.