Portugal knocks Korea out of U-20 Cup

Portugal knocks Korea out of U-20 Cup 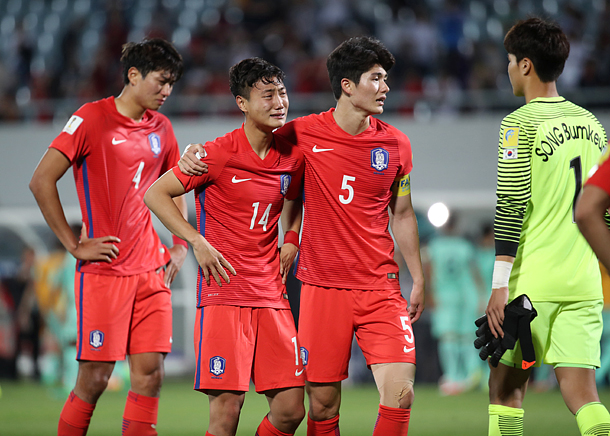 The U-20 Korean national football team after losing its round of 16 match of the FIFA U-20 World Cup to Portugal at the Cheonan Sports Complex on Tuesday. [YONHAP]

The U-20 Korean national football team concluded its journey at the FIFA U-20 World Cup after losing 3-1 to Portugal in the round of 16 match at the Cheonan Sports Complex on Tuesday.

Korea struggled with their defense during the first half, allowing two of the three goals. Less than ten minutes into the game, Xanda Silva scored Portugal’s first goal, and in the 27th minute, Portugal extended their lead with Bruno Costa’s goal. Lee Sang-heon scored Korea’s only goal in the 81st minute to give the team some hope, but in the remaining time, the players weren’t able to score additional goals.

“I feel really sad and regretful,” Lee Seung-woo said after the match as quoted on Yonhap. “Although this tournament is over, I’m not done. I will keep moving forward to pursue my dream.”

Shin Tae-yong, head coach of the U-20 Korean national football team, used a 4-4-2 formation for the match, with Cho Young-wook and Ha Seung-woon up front. Shin had his attackers as defense in the lineup, with a plan of scoring early in the match to dominate the flow of the game. Of the four different formations Shin used throughout the matches, this was the most aggressive.

But it was a failure. Since Korea trained mostly in 4-2-3-1 formation, with their new 4-4-2 formation, the team allowed a gap in their defense, which eventually led Portugal to score three goals. The new formation also made the Barcelona duo, Lee Seung-woo and Paik Seung-ho, get more involved in defense, which reduced the team’s opportunities to score.

“Since the group matches, Korea had been using different formation,” said Lee Young-pyo, a retired football player who is now a sports commentator for KBS. “A formation change in every game may mean confidence, but at the same time, it can also mean instability. It can only be determined by the result of the game. That said, Shin Tae-yong’s decision was a failure.”

In the beginning of the second half, Shin substituted Lee Sang-heon and went back to the 4-2-3-1 formation, but they weren’t able to overcome the three-goal deficit. The team showed inconsistency in their cross and their through-passes got blocked. Prior to the game, Shin said the team prepared about 20 different set-piece options, but during the match, they were inactive.

“I’ve been working for this tournament for two years, but it came to the end so early,” Paik said after the match, as quoted by Yonhap. “I will make improvements and go back to Barcelona B to earn my spot there.”

Looking at the members of the U-20 English and Portuguese football teams, they had a lot of players who had experience playing on elite clubs in the European league, whereas the Korean team’s players weren’t given such opportunity while playing for K-League clubs or university teams.

“I feel bad about our loss and to our fans for not getting the result the fans expected from this match,” Shin said. “Just like the players on the English and Portuguese teams, our players need more play time,” Shin said.

With another loss, the U-20 Korean national football team remains winless against Portugal, having a record of three ties and five loses.

Meanwhile, Japan was also eliminated from the round of 16, losing to Venezuela.

For Japan, this was the first time in ten years for the team to play at the U-20 World Cup and fail to leave a strong impression, as they barely made it to the round of 16.

Though Korea has concluded their journey in the U-20 World Cup, as host, the event will continue to be played in six different cities in Korea until June 10.