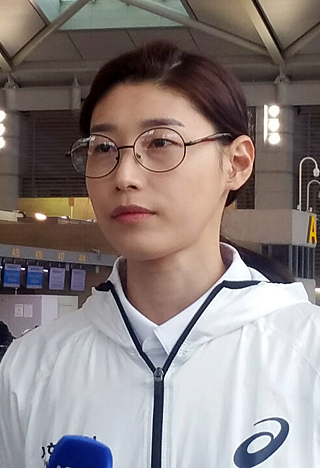 Kim Yeon-koung, Korean volleyball star, speaks to reporters at Incheon International Airport on Wednesday before departing for Bangkok for a special match. [YONHAP]

Korean volleyball star Kim Yeon-koung said Wednesday she hopes to duplicate her success in Europe with her new club in China.

Kim, one of the world’s top attackers, recently signed a one-year deal with Shanghai Guohua Life in the Chinese Volleyball League. It spelled an end of a six-season stint with Fenerbahce, with which Kim won two league championships and one continental title. She was the European Champions League MVP in 2012, the Turkish league MVP in 2015 and the Turkish Cup MVP in 2015.

The 29-year-old said she hopes to keep dominating the competition in a new league.

“In China, I’d like to accomplish the things that I did in Turkey,” Kim told reporters at Incheon International Airport. Kim was scheduled to depart for Bangkok with the rest of the national team for a special match Saturday. 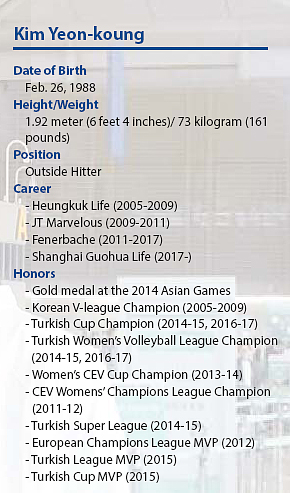 “I am excited to take on a challenge on a new stage,” Kim added. “I’d love to win a championship in China too.”

Though financial terms of her deal weren’t disclosed, Kim’s agency, Inspokorea, said the player got the most lucrative deal in the Chinese league history.

“I started receiving offers from China in December last year,” Kim said. “I put a lot of thought into the process before making my decision.”

“I believe the Chinese team wanted to use me for marketing purposes and have me share my experience with the teammates,” Kim said. “I want to become a player who can teach a few things to the Chinese players, and the primary goal, of course, is to win a championship.”

Since Kim only signed for one year, she will test the open market again in 2018.

“A year from now, some other path could open up,” said Kim, who has also played for clubs in Korea and Japan. “I may return to Europe or move to another league in Asia.”

Kim said Fenerbahce’s front office and teammates alike wanted her to stay put in Turkey, and it was also difficult for her to leave a team after half a dozen years there. 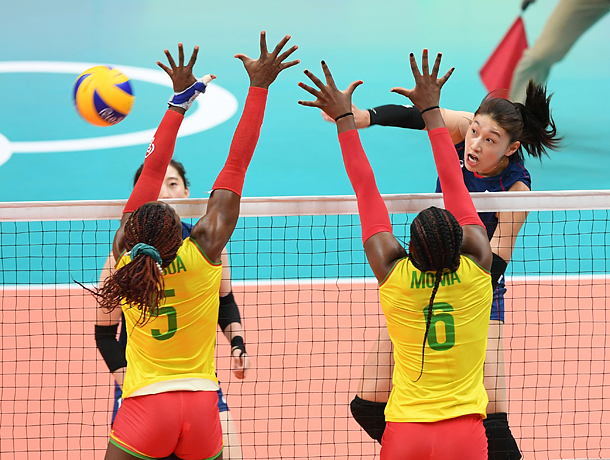 Kim Yeon-koung, far right, spikes at the Olympics. After playing six seasons with Fenerbache of the Turkish Women’s Volleyball League, she will be playing for the Shanghai Guohua Life in the Chinese Volleyball League for the 2016-17 season. [JOONGANG PHOTO]

Kim said she thoroughly enjoyed her time in Turkey but ultimately, her commitment to the national team was the difference maker.

“The Chinese season is about two months shorter than Turkey,” Kim said. “It will help me focus more on the national team. My biggest personal goal is to win a medal at the 2020 Tokyo Olympics.”