Korea’s trade with Asean rising faster than others

Korea’s trade with Asean rising faster than others 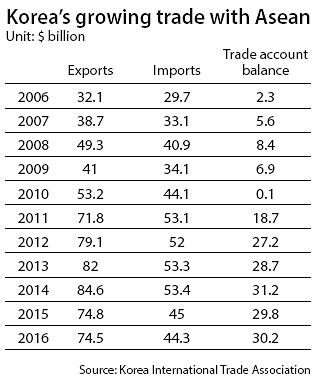 It’s been 10 years since Korea signed a free trade agreement with the Asean economic bloc, and commerce between the two markets has enjoyed average annual growth of 5.7 percent, much higher than Korea’s 2.4 percent trade growth with other countries.

Southeast Asia is now Korea’s second-largest trading partner after China and last year accounted for 13 percent of Korea’s overall trade, which totaled $901.6 billion. This is a significant improvement considering trade with the Asean nations only accounted for 9.9 percent a decade ago.

The figures were part of a report released Wednesday by the Ministry of Trade, Industry and Energy and the Korea International Trade Association celebrating 10 years since the trade deal was signed. The Asean bloc has played a vital role in Korea’s exports, and the country’s market share in this region has expanded while that of other major economies including the United States and Japan has been shrinking in the past decade.

China, though, outpaced Korea in expansion, growing to nearly 20 percent market share from 12.5 percent over the same period. Among Asean nations, Vietnam was Korea’s largest trading partner with trade last year totaling $45.1 billion, followed by Singapore with $19.3 billion and Malaysia with $15 billion. Exports to these three countries accounted for the majority of Korean goods shipped to the economic bloc, 70.6 percent.

Since the free trade deal, Korea’s exports have been growing at an average 7.5 percent. That’s faster than China’s annual 4.7 percent growth and the United States’ 4.2 percent. In the past 10 years, telecommunications products including smartphones and flat-screen displays have seen a sharp increase in exports to Asean markets.

“Considering the current trade environment in the U.S. and China, Asean’s importance will likely expand further,” an official at the Ministry of Trade, Industry and Energy said. U.S. President Donald Trump has been criticizing America’s trade imbalance with exporting countries and suggested that free trade deals, including the one with Korea, be revised or canceled.

And in China, a consumer boycott of Korean products over the installation of a controversial U.S. missile shield has raised alarm bells that Korea might need to diversify its export markets. China, though, still remains Korea’s largest trading partner at $211.4 billion.