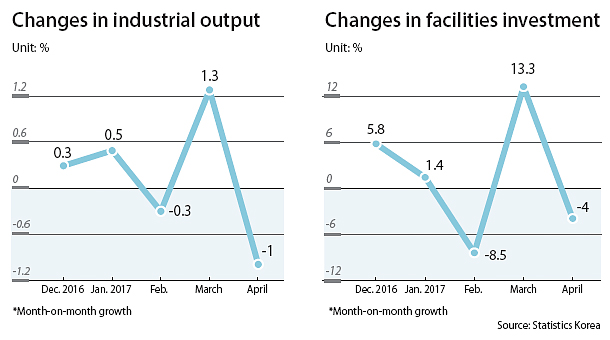 Production fell 1 percent in April from the previous month, marking the biggest fall since January last year, according to Statistics Korea, the government’s data collection agency.

For the past few months, industrial output has been on an up-and-down roller coaster ride. The figure was on an upward trajectory from November last year until this February, when it fell. It then recovered in March but dropped again in April.

Lawmakers opposed to a supplementary budget had been arguing it was unnecessary, using the output numbers as evidence of an economic recovery, but the latest data may give fodder to those who support more government spending.

The statistics agency, though, says the fall is temporary and does not suggest the economy is weakening again. It chalked the April drop up to a base effect from March, when output increased dramatically from February.

Month on month, the manufacturing operation rate dropped 1.1 percentage points to 71.7 percent, which means only about 7 in 10 factories were operating in April. Investment, too, was sluggish with facilities investment, including in equipment and machinery, falling 4 percent compared to the previous month.

The Ministry of Strategy and Finance said this was largely due to flagging performance in machinery and transportation-related industries, including automobiles.

“Retail sales improved largely due to home appliances and telecommunication-related goods, including products like new smartphones that were launched in the country,” said Joo Hwan-wook, a director at the Finance Ministry. “Consumer sentiment has also improved as well.”

The composite consumer sentiment index stood at 108 in May, up 6.8 points from the previous month and up from 96.7 in March.

A reading above 100 points indicates the majority of survey participants maintain a positive outlook on the national economy, while a reading below 100 indicates a generally negative view.