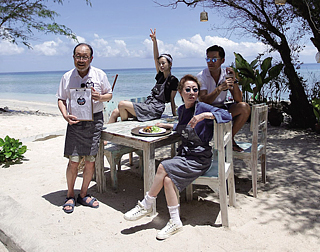 The number of Chinese television networks suspected of plagiarizing Korean entertainment programs has grown with another program that is very similar to the tvN hit show “Youn’s Kitchen” set to be broadcast in China during the second half of the year.

Television network Hunan TV recently announced their broadcasting schedule for the second half of the year, and an entertainment program named “Zhong Can” was included on the schedule for the third quarter. The show’s introduction states, “Five celebrities set up a Chinese restaurant overseas for fifteen days and proudly promote China’s cuisine.” The format is strikingly similar to “Youn’s Kitchen,” which had celebrities set up shop in Indonesia for ten days, selling Korean food.

The broadcaster behind the “Youn’s Kitchen,” tvN, said “There has been no internal meeting regarding exporting the format or publication rights for ‘Youn’s Kitchen.”

Recently, the plagiarism of Korean entertainment shows by Chinese broadcasters has been an issue as shows such as “Einstein,” “Three Meals a Day” and “Fantastic Duo” all have strikingly similar programs being broadcast in China.