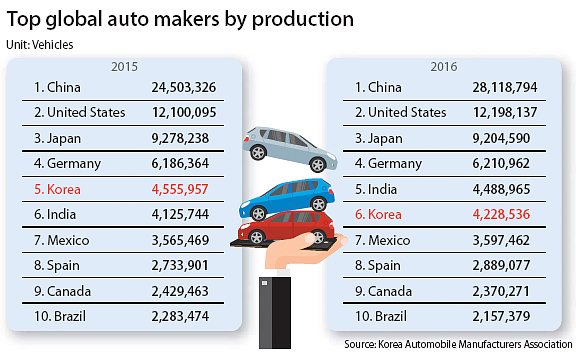 Korean automotive output had the worst quarterly performance in seven years during the first quarter, the most drastic year-on-year fall among the top-10 global manufacturers.

The nation produced about 1.04 million cars from January to March this year, down 2.8 percent in comparison to the same period a year ago, according to data from the Korea Automobile Manufacturers Association (KAMA). This is the lowest figure since the first quarter of 2010, when production in Korea stood at some 970,000 vehicles. While domestic sale rose 1.6 percent, exports fell 3.8 percent year on year.

“Despite the rise in exports of eco-friendly vehicles and premium vehicles [such as Genesis], uncertainties from abroad such as the U.S. key rate hike and the Korean won losing ground all contributed to fallen exports,” said the KAMA report.

The 2.8 percent fall in production is significant when compared to other major carmakers around the world.

While production volume by the United States and Canada retreated 2.1 percent and 2.5 percent each, other manufacturers increased production.

Mexico is on the heels of Korea, which is ranked sixth in the world in terms of production volume.

Data showed that Mexico’s automobile output rose 18.2 percent year on year. Its quarterly production from January to March stood at 994,560 cars, only about 10,000 less than Korea.

“It’s not a structural problem per se,” said Jeon Jae-chun, a researcher at Daishin Securities. “It’s customary for the companies to build factories where there is demand for their cars in order to avoid tariffs and places like Mexico are an ideal production base to manufacture cars sold in North and South America, not to mention the cheap labor costs there.”

Jeon added that unions and steep labor costs in Korea also make it difficult for carmakers to build factories here. Those who already have manufacturing plants in Korea may be reluctant to expand production for similar reasons. The latest data show that production in April fell as well, down 6 percent from March to 380,000 or so vehicles.

The KAMA data indicate that Korea was the fifth largest automaker in the world in 2015, producing about 4.5 million vehicles that year. But in 2016, India knocked Korea down to sixth after its production rose by more than 350,000 while Korea’s yearly output fell by about 300,000 cars. Data from this year showed that the gap between India and Korea is widening, as India’s output jumped 9.7 percent.

Jeon from Daishin Securities explained that India is a hub for carmakers to build vehicles for domestic sale and for export to nearby regions. India is the fifth-largest car market in the world but the government slaps an import tax of about 60 percent on completed cars, which means it is nearly impossible to sell vehicles there without a production plant on site.