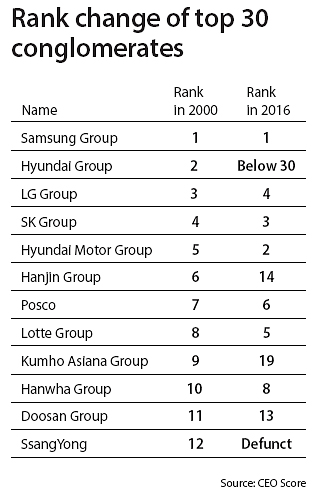 Nearly half of Korea’s top 30 conglomerates have either fallen off the list or disbanded since 2000, an indication that Korea Inc. has undergone a seismic transition in the past two decades, according to the latest asset value rankings from local corporate research firm CEO Score.

Among the 30 companies that had the highest amount of assets in 2000, 13 of them have since dropped off the list or folded, according to the data released Wednesday.

Samsung Group continued to reign at the top of the list. Eleven other powerful chaebol also retained their spot in the top 30.

Hyundai Group, which ranked second in 2000, has been booted off the list. Its business in the Kaesong Industrial Complex in North Korea fell through in the wake of frozen ties between North and South Korea last year. The group’s assets also took a hit after it sold Hyundai Securities to KG Financial Group and shipping arm Hyundai Merchant Marine to the state-run Korea Development Bank.

LG Group and SK Group saw their third and fourth ranks flipped, Lotte Group climbed from eight to five, Hanwha Group squeezed into eighth and Shinsegae jumped from 24th to 11th. Posco, Hyundai Department Store, OCI, Hyosung and Youngpoong made their way back onto the list.

Seven groups had their ranks downgraded but still remained in the top 30. Kumho Asiana nose-dived from ninth to 19th as it suffered a family feud over succession of management control. Hanjin Group, owner of national flag carrier Korean Air, retreated from sixth to 14th after its shipping affiliate went bankrupt.

Companies that were in the top 30 in 2000 and have since folded include Gohap, once a leading textile manufacturer and ranked 30th, and automaker SsangYong, which had stood at 12th.