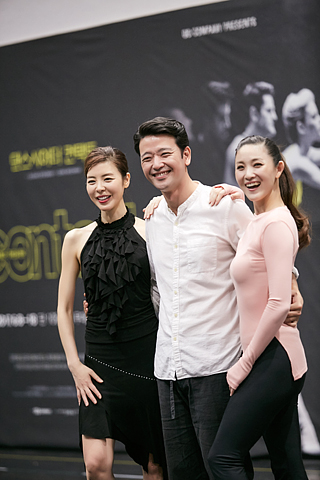 Premiering in Korea in 2010, “Contact” is a genre of its own. It is a dance theater piece which focuses on choreography rather than singing. Rather than sticking to the traditional style of musicals, in dance theater, the choreography acts as the main force that unfolds the dramatic synopsis.

Tome Cousin, the original direction re-creator and who was in charge of directing and choreographing in 2010, said “It is an honor to come back to Korea again, and as dance is a universal thing, I think anybody can relate to this piece. As the name of the show suggests, I hope the audience can connect with others through our show.” At the press conference on May 25, producer Shin Chun-soo, the CEO of OD Company, said “Whereas the genres of performances in Korea are limited, I hope ‘Contact’ will act as the piece that will broaden the scope of performance genres in Korea.”

Premiering in 1999, “Contact” won four Tony Awards including Best Musical in 2000. It consists of three thematically-linked short stories that are mostly told through dance and dialogue, depicting the characters’ attempts to connect with each other. The show unfolds through dance numbers performed to musical genres ranging from contemporary jazz, classic, jive, rock to swing.

The opening section of the show, “Swing,” was inspired by the 18th century French painter Jean-Honore Fragonard’s painting “The Swing,” and depicts a witty love story between a European aristocrat and her servant. The second story, “Did You Move,” takes place in an Italian restaurant, where a violent husband and an unhappy wife are having dinner. Fed up with how her husband treats her, she fantasizes about running away from her verbally abusive spouse and dreams about being a beautiful ballerina and dances to the tunes of Tchaikovsky and Bizet.

The final part, “Contact,” explores the emptiness felt by the career-driven New York businessman Michael Wiley, which will be played by actor Bae Soo-bin. At a local jazz bar, he encounters a stunning woman in a yellow dress, and dances to win her heart. The woman in the yellow dress who steals Wiley’s heart will be played by both the ballerina Kim Joo-won and actress Kim Gyu-ri, who appeared on “Dancing with the Stars.”

Kim Joo-won debuted as a musical actor with this piece back in 2010 and was awarded at The Musical Awards with this role.