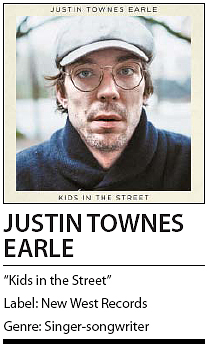 Justin Townes Earle seems to have put away some of the demons that animated his earlier work. He’s sober, newly married and about to become a father, and his songs don’t sound as tortured.

But if it feels like he has sorted things out, Earle demonstrates on “Kids in the Street’’ that he still has plenty to say. He’s playful, adventurous and settling into his talent, with an album that rivals his best work.

Earle long ago established himself as a first-rate singer-songwriter, living up to his legacy as the son of the great songwriter Steve Earle, and the namesake of another, Townes Van Zandt.

Now there’s a comfortable confidence - and less torture. He explains his newfound maturity on “What’s Goin’ Wrong’’ when he sings: “Now I’m not certain, but maybe I am learning.’’

“Ask yourself has it been so long,’’ he sings wistfully, “that I’ve forgotten where I went wrong.’’

He hasn’t forgotten, which lets his music retain its edge. But he has things in perspective.