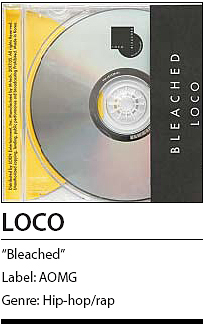 Since releasing his extended play “Locomotive” in 2014, rapper Loco has kept moving forward. Winner of the first season of hip-hop audition program “Show Me the Money,” he finds himself one of the biggest names in hip-hop and has even gone on to become a judge for the show as well.

Like the album name, “Bleached,” the project follows the rapper’s path from dark to light. It’s a collection of feelings from the dark times when his future was cloudy to the brighter life he now lives. The songs on the album reminisce on the rapper’s past while also showing appreciation for the success he currently has.

Some of the album’s biggest highlights are not from Loco, but come from guest appearances from some of the hottest artists in Korea. R&B star and label mate Hoody lends a hand on “Da Da Da,” while last year’s breakout R&B singer Dean is featured on “Too Much.”

Fans looking forward to hearing more about Loco’s personal thoughts may be let down due to the high number of guest appearances on the album, as seven out of 12 tracks contain a featured verse.