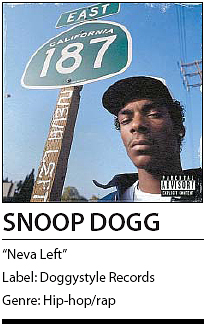 There’s a strong whiff of the past on Snoop Dogg’s new album, starting with the cover: A throwback photo of the young rapper taken almost 25 years ago in front of a Route 187 sign in Los Angeles. The title is a nod to his endurance: “Neva Left.’’

The D-O-Double G may be spending time on talk shows, designing soccer cleats or cooking with Martha Stewart, but he still seem to have lots to prove on his 15th studio CD, a deeply chaotic album that reflects hip-hop’s constant changes swirling around our ever-fixed Snoop.

Whoever comes, Snoop keeps up.

“Go On’’ is an R&B treat and “Bacc in Da Dayz,’’ which samples early Tribe Called Quest, was clearly designed to make your car shake so hard the mirrors might fall off.

“Big Mouth’’ doesn’t just sound like a blast from the past - it’s like listening to the Big Bang of rap.