Ministry tried to keep Moon in the dark: Blue House

Ministry tried to keep Moon in the dark: Blue House 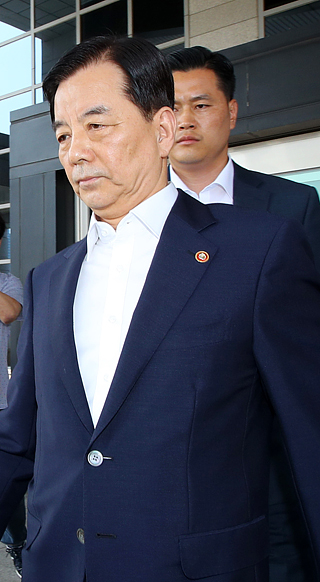 Defense Minister Han Min-koo walks out of the Defense Ministry in Yongsan District, central Seoul, on Wednesday. Han said he did not order any omissions from a Blue House briefing Friday. [YONHAP]

“After our investigation, we have confirmed that the Defense Ministry intentionally omitted the delivery of the launchers in its report [to the National Security Office],” said Yoon Young-chan, senior presidential secretary for public relations, in the Blue House press room.

The Blue House’s claim is a direct contradiction of the Defense Ministry. On Tuesday, it claimed it informed Chung Eui-yong, chief of the security office and de-facto security adviser for President Moon Jae-in, of the four launchers in the briefing Friday.

Yoon said that all Defense Ministry officials questioned by the Blue House acknowledged the omission, and that the four additional launchers were, in fact, mentioned in a draft of a report for the briefing.

“Our probe proved that an initial draft report contained information saying six launchers were stored in a military camp. But after reviews [by senior defense officials], we learned those lines were taken out,” Yoon continued.

“Instead, it vaguely stated [the equipment] had been brought in [to the country].”

Asked how vague the briefing was, a Blue House official, who asked for anonymity, said a person who read the final report would not know the four launchers had been delivered.

The Blue House official said Lee Sang-chul, first deputy chief of the National Security Office, grew suspicious about the final report and asked a defense ministry official for more details following the briefing Friday. He learned that the four launchers had been brought into Korea. Lee reported it to Chung the next day.

After being tipped off about the four additional launchers, Chung asked Defense Minister Han Min-koo during a luncheon Sunday whether they had indeed been delivered to Korea in addition to the two launchers already deployed to Seongju in North Gyeongsang in April.

“I heard that four launchers were transferred here,” Chung was quoted as saying to Han by Yoon.

The military chief didn’t acknowledge it, but instead asked Chung, “Have they really?” according to the Blue House.

The conversation between Han and Chung fueled suspicion that the military was trying to keep President Moon and his office in the dark over the Thaad deployment, knowing that the Moon government is not in favor of it. If Han lied to the top security adviser to the president on Sunday, it could raise serious questions about breach of trust as the top military official.

The Blue House official did not rule out the possibility that the minister had lied, saying reporters should ask Han about it.

On Tuesday, the Blue House revealed that the Defense Ministry had not reported the transfer of the four launchers to the Presidential Advisory Commission on State Affairs Planning during a briefing on Thursday, and that Moon belatedly confirmed delivery of the four launchers on Monday in a telephone conversation with minister Han.

Moon was quoted as saying it was “extremely shocking” that the four launchers were brought in clandestinely.

In response to the Blue House’s statement, Defense Minister Han said Wednesday he did not order descriptions of the delivery of the launchers to be omitted from the briefing.

“I did not make such an order (to omit the delivery part),” the minister told reporters at the Defense Ministry. Han said lower level officials might have taken the information out, thinking that the transfer of the four launchers was implied in the final report.

On his luncheon with security adviser Chung, Han signaled that his chat with Chung might have been taken out of context, saying, there could have been subtle “differences in nuance and perspective.”

The Defense Ministry announced in March that components of the anti-missile system had been brought into the country and said it would not disclose every detail on the deployment as it involved national security. The Blue House acknowledged Wednesday that some details about the deployment should be hidden from the public for national security’s sake.

But it stressed that misleading the presidential office was a far graver issue.

The Blue House’s aggressive moves in dealing with the Thaad controversy suggest that President Moon will order an extensive reshuffle of the military leadership, with Minister Han likely to be the first head to roll.

Moon could also use the very public controversy over the four launchers as a negotiating card during his summit meeting with U.S. President Donald Trump, expected to be held later this month in Washington. Trump has said Seoul should pay $1 billion for the Thaad system, although other members of his administration have rejected that claim.

He also said he wants the United States to give his administration some more time to conduct an environmental impact assessment and discuss the matter at the National Assembly. “Even if it takes time, it is an expense that we have to pay as a democracy,” Moon was quoted as saying.

The U.S. Forces Korea began installing key components of the Thaad battery on a former golf course in Seongju County, North Gyeongsang on April 26 - less than two weeks before the May 9 presidential election. Despite protests by Beijing and Moscow, Seoul and Washington agreed on the deployment in July last year, during the presidency of Park Geun-hye. The rushed deployment of the antimissile system took place while the country was under the leadership of an acting president after Park was impeached and removed from office in March.

A Thaad battery typically consists of six truck-mounted launchers, 48 interceptors (eight per launcher), a fire control and communications unit, and powerful AN/TPY-2, or X-band, radar. The deployment in April included the radar system and two missile launchers and interceptors used with them.

During the campaign, Moon made clear his objection to the rushed deployment. He maintained on the campaign trail the Thaad deployment should be reviewed by the National Assembly and an incoming government before a conclusion was reached on the contentious issue.

Park Soo-hyun, presidential spokesman, said Moon met with Senator Richard Durbin, the Democratic whip, who paid a visit to the Blue House as part of a trip to Korea. Asked by Durbin about the latest series of news reports concerning the Thaad deployment, Moon said he does not treat lightly the agreement between Seoul and Washington to deploy the battery, although it was made by his predecessor.

“My order for the probe was a measure entirely for domestic affairs, and I want to make clear that it was not intended to reverse the existing agreement or to send a message to the United States,” Moon was quoted as saying.