Korean team reflects on U-20 elimination

Korean team reflects on U-20 elimination 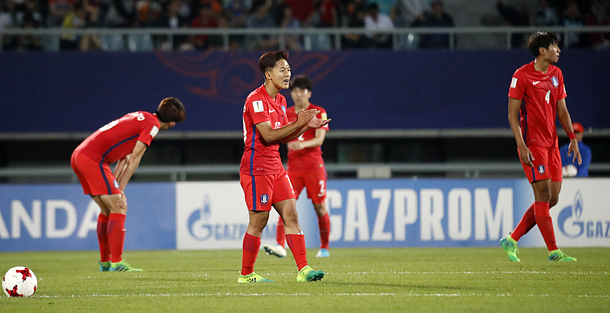 The U-20 Korean national football team during its round of 16 match against Portugal at the FIFA U-20 World Cup in Cheonan Sports Complex on Tuesday. [YONHAP]

After the Korean U-20 national football team’s loss against Portugal, the ride back to the hotel was silent, save the sound of weeping. Even Song Bum-keun, a goalkeeper who usually blasts music on bus rides, was also quiet.

“The players cried so much in the locker room and in the bus,” Song said on Wednesday before the team dispersed.

“There was a time when Paik Seung-ho trained until he threw up,” Cho Young-wook said. “But he still stood in front of the team and led us. I feel bad that I couldn’t do anything on the front line.”

That night, the players gathered in small groups talking about their matches. Lee Sang-min, Cho, Jung Tae-wook and Han Chan-hee went to a nearby convenience store.

“To prepare for the event, we didn’t even eat instant noodles when we got to the convenience store,” said Cho, “but after, we had like three to four cup noodles each.”

Fans also showed great disappointment, posting criticism towards the players online. Now, however, the players have to put aside their disappointment to move forward in their football careers, considering their loss as a stepping-stone.

“I think we had a good experience preparing for the event,” Lee Seung-woo said. “Rather than giving up, we’ll keep moving forward towards our goal.”

The players at the U-20 event are expected to be the ones to lead the Korean national football team in the next three to five years, at the 2020 Tokyo Olympics and 2022 Qatar FIFA World Cup. Ki Sung-yueng of Swansea City and Koo Ja-cheol of Augsburg have now become two of the leading players on the national team.

Just like the young players, they come from similar experience, where they once led the U-20 team to the quarterfinals at the 2009 FIFA U-20 World Cup and won a bronze medal at the 2012 London Olympics.

“The FIFA U-20 World Cup wasn’t the stage to prove something, it was more of a stage for the team to experience a real challenge,” said Ahn Jung-hwan, retired football player who is now a commentator for MBC. “Our players showed that we have a bright future ahead of us in the Korean football. I hope they take the loss against Portugal as nourishment.”

For the U-20 players to follow the path of some of Korea’s best football players on the national team right now, it is a must for them to gain more experience. Of the 11 best players during the match against Portugal, six were college students. But in the Portuguese U-20 team, eight players played for Primeira Liga clubs, S.K. Benfica and FC Porto. Although the majority still play on the second division team, they had a lot more playing experience compared to the Korean U-20 national team. That said, the match against Portugal was more like a match between the professionals and amateurs.