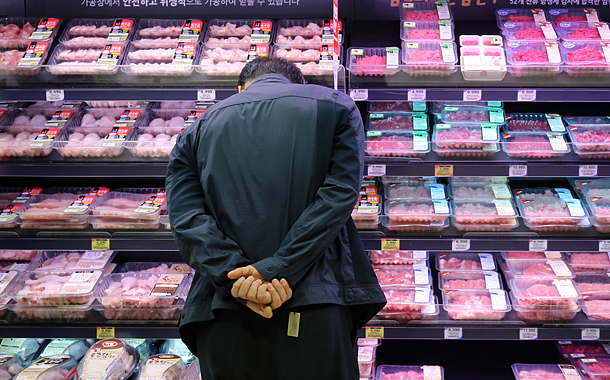 A shopper checking out the chicken at a major retail store in Seoul on Thursday. Chicken was one of the food products that saw a sharp price increase in May. [YONHAP]

The country’s consumer price index gained 2 percent last month from a year earlier, up slightly from the previous month’s 1.9 percent rise, according to data from Statistics Korea.

Consumer prices have been hovering around 2 percent since January due to a sharp gain in oil prices, following a 1.3 percent on-year gain in December. From a month earlier, the index edged up 0.1 percent in May.

“Crude oil prices has been on a rise for nearly a year, although the upside pace has been slowing down to some extent,” said Woo Young-jae, director of the price statistics division at the statistical bureau.