Fed official predicts up to 4 rate hikes this year

Fed official predicts up to 4 rate hikes this year 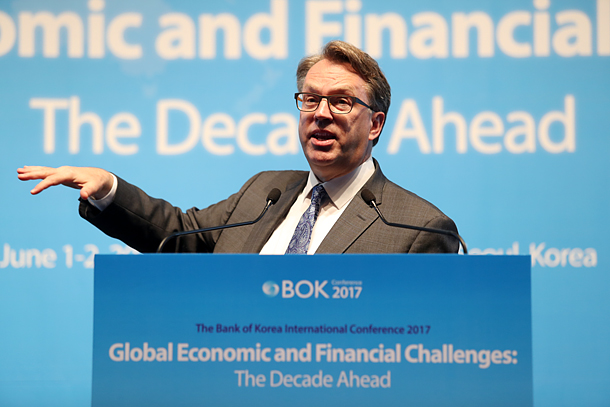 John C. Williams, president of the Federal Reserve Bank of San Francisco, speaks during an international conference hosted by the Bank of Korea on Thursday at the Westin Chosun Hotel in central Seoul. [BANK OF KOREA]

A senior U.S. Federal Reserve official on Thursday projected the Fed would raise interest rates three to four times this year as the U.S. economy is on a path toward moderate growth.

John C. Williams, president of the Federal Reserve Bank of San Francisco, suggested three hikes as his baseline view, but even four raises could be possible if certain upsides take place.

“I could imagine if the economy strengthens, four rate increases this year would be appropriate,” Williams said during a press briefing on the sidelines of a conference held by the Bank of Korea in central Seoul.

The defining events include a large-scale stimulus package by the Donald Trump administration. “There is potential for upside occurrences in the economy,” he said. “One big question mark is if there is big fiscal stimulus or other changes in the outlook that we see the economy is doing better than we thought.”

While Williams does not have a vote on the central bank’s policy committee this year, his views are considered an influential voice given his experience working closely with Fed Chair Janet Yellen when she led the San Francisco Fed.

The U.S. central bank raised its benchmark short-term interest rate in mid-March by 0.25 percentage points to a range of 0.75 percent to 1 percent. Analysts predict high chance of another increase in June, especially with U.S. economy doing well overall.

Still, low inflation may get in the way of robust growth. “The one challenge that we still face in terms of monetary policy is the inflation that is still below our 2 percent goal,” Williams said. “But with the economy continuing to grow and the labor market strong, I expect inflation over the next year or so will move 2 percent.”

The Bank of Korea’s governor, Lee Ju-yeol, also shared his view on the challenges and prospects of the Korean and global economy during the conference. Lee cited an aging population as one of the most pressing challenges facing the economy.

Alongside the issue, Lee also warned of the impact that advanced technologies will have on employment. “In the era of the fourth industrial revolution, now in progress, there are concerns that the number of unskilled jobs could decline rapidly.”

On Korea’s overall economic performance, though, the governor struck an optimistic tone, saying the global economy’s regained momentum is helping the local economy.

Lee previously hinted at the possibility of an upward revision on economic outlook this year during a rate-setting meeting last month, the first since President Moon Jae-in took office.