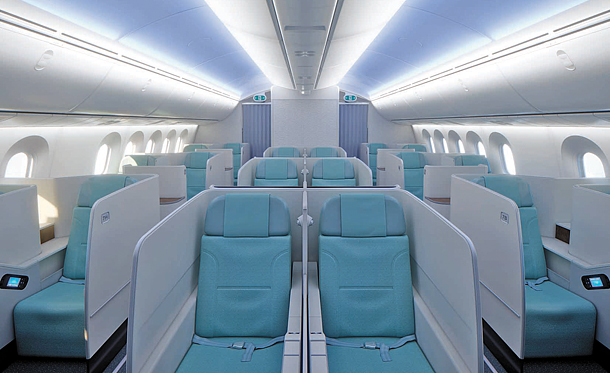 Boeing calls the B787-9, acquired by Korean Air, the Dreamliner for its technology. [KOREAN AIR]

Korean Air launched its latest acquisition, Boeing’s B787-9 on its first international flight on Thursday. Departing at 9:35 a.m., the plane flew from Incheon to Toronto. The company plans to deploy the model on Incheon-Madrid and Incheon-Beijing routes starting in August once it clears security tests.

Thursday’s takeoff also marked the beginning of a sky war of high-end aircraft between Korean Air and Asiana Airlines. Asiana made the first move, as its newest jet airliner, an Airbus A350-900, made its first international flight from Incheon to Manila on May 15. This month, the fleet will start operations from Incheon to Osaka and expand trips to and from San Francisco and London during this year’s second half.

Both jets are the youngest models of their respective makers flying in the skies. Boeing calls the B787-9 the “Dreamliner,” for containing the company’s latest technology. Airbus says its A350-900 is a combination of all cutting-edge technology.

The confidence is shared by the airlines that acquired them. In a press conference held in February, Korean Air CEO Cho Won-tae said that he believed the B787-9 is the “most outstanding aircraft in terms of both fuel efficiency and passenger convenience.” 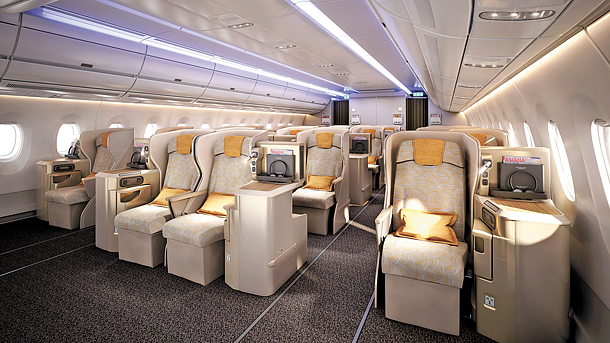 Asiana CEO insists the A350-900 is “better than its competitor in every way.’ [ASIANA AIRLINES]

Asiana Airlines CEO and President Kim Soo-cheon said in the annual shareholders meeting in March that “A350-999 is an even younger model than the B787-9” and insisted it was “better than its competitor in every way.”

Fleet manufacturers’ level of technology is demonstrated in their frames. Half of the B787-9 operated by Korean Air consists of carbon composite material by weight. The body and the wings are made with carbon laminate, a high-intensity material based on carbon fiber. This ingredient is 10 times stronger than steel but weighs only a fourth of it. The fleet also contains 20 percent aluminum alloy and 14 percent titanium alloy, which makes the percentage of new material on B787-9’s body frame 84 percent.

The A350-900 contains less new material at 70 percent - 53 percent of carbon composite material and 17 percent aluminum alloy. A combination of copper, magnesium and silicon, aluminum alloy is also well-known for its hardness.

Boeing explained that the models are in different weight divisions. “B787-9 is a midsize plane whereas the A380-900 is categorized in a bigger-sized group-it’s only natural the two aircraft differ in size or maximum load weight” the company said. Airbus replied that “A350-900’s comparable model is the B787-9,” implying that two fall in the same fleet category.

The cabin condition that decides passenger’ comfort is largely incomparable. The main reason why passengers easily feel weary inside the cabin is the air pressure is lower than on the ground. Asiana’s A350-900 has a slightly higher cabin air pressure at 821 hPa compared to Korean Air’s B787-9 of 900hPa, meaning the former has a lower possibility of the passenger experiencing a headache or indigestion on board.

In terms of cabin humidity, B787-9 takes the lead. Its air compressor can pull up cabin humidity up to 22 percent maximum, higher than Asiana A350-900’s 15 percent.