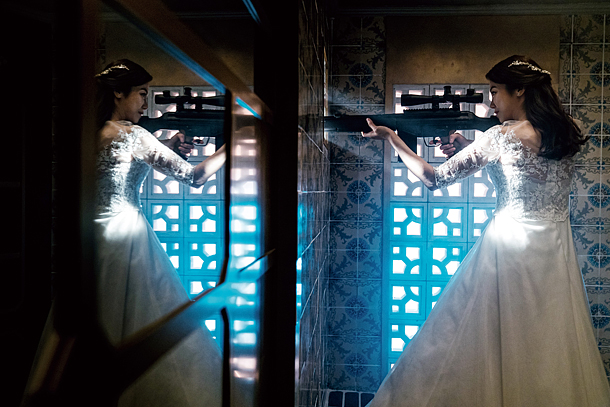 “The Villainess,” which was screened at Cannes, features actress Kim Ok-bin. [NEXT ENTERTAINMENT WORLD]

Female assassins are not commonly found in Korean films, and some even think that featuring such a character in a movie may come with commercial risks.

However, filmmaker Jeong Byeong-gil of “Confession of Murder” (2012) embraced the risks when he became the director of “The Villainess,” which was screened at the Cannes Film Festival last week during the Midnight Screening section.

Revolving around a beautiful Korean-Chinese assassin named Suk-hui, the action-packed movie unfolds as she gets a second lease on life after the South Korean intelligence agency recruits her to be a sleeper cell.

“I’ve always wanted to make an action movie with a female main cast,” said the director during a press preview held in Gwangjin District, eastern Seoul, earlier this week.

“Though I have seen so many of these films from Hong Kong, these types of movies were not made in Korea.”

The director said that “The Villainess” is an ironic name. “It is only what [she] seems like that makes [her] look like a villain. She is in fact a very kind and innocent character at heart.”

“Since every action scene had different styles, the role was extremely challenging. Getting bruises and bleeding were something that happened almost every [day],” the actress said.

She added, “[Suk-hui’s] actions felt like something that she did to survive. Though Suk-hui’s actions felt big and powerful, she seemed like a person with a weak and pain-filled heart.”

She continued, “Honestly, it wasn’t easy playing the character because it felt that her actions and emotions did not match. After mulling over how to express [the contrast], I managed to pull it off by [imagining what] people who get used by others for their talent [would feel].”

The R-rated film is in theaters now.