Jeju Forum for Peace and Prosperity kicks off its 12th year

Jeju Forum for Peace and Prosperity kicks off its 12th year 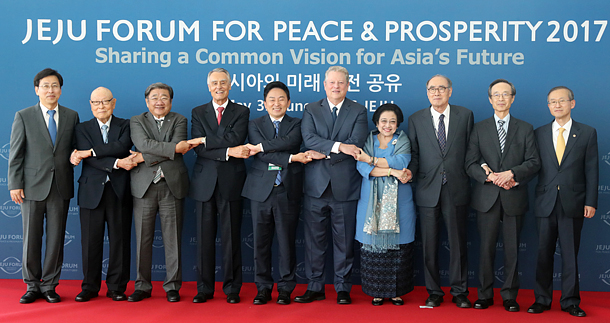 SEOGWIPO, Jeju - The 12th Jeju Forum for Peace and Prosperity kicked off two days of discussions on Thursday and thought leaders from around the world called for peaceful cooperation among nations in Asia to combat terrorism, climate change and economic challenges.

“This forum focuses on sharing a common vision for Asia’s future,” said former U.S. Vice President Al Gore, addressing thousands of participants from 80 countries at the International Convention Center Jeju in Seogwipo. “There is old African proverb that says, ‘If you want to go quickly, go alone. If you want to go far, go together.’”

“The essence of our challenge today is that we have to go far quickly, which means that we must have a common vision,” Gore continued. “It is essential that we harness our ability to follow that common vision to collaborate and cooperate internationally and to overcome the greatest challenges of our time, including solving of the climate crisis which is connected to both peace and prosperity.”

The former vice president congratulated Jeju on its commitment to become a carbon-free island by 2030.

‘“An Inconvenient Truth’, as former U.S. Vice President Al Gore put it, has become better known across the world,” said Jeju Gov. Won Hee-ryong. “Recently, the world has been facing an ‘inconvenient truth’ that threatens the peace of humanity as a new world order was created centered on strong powers, threatening the dreams and futures of small and less powerful countries. Peace and prosperity in Asia, which the Jeju forum is pursuing, cannot be made possible without cooperation among different countries.”

“The new government of the Republic of Korea will fulfill its responsibility and play its part in pursuing the peace and common prosperity of Northeast Asia,” Moon said in the message. “In cooperation with relevant countries including the United States and China, we will bring North Korea to dialogue through persuasion and pressure and achieve a resolution of the North Korean nuclear issue as well as improvements in inter-Korean relations and U.S.-North Korea relations.

Leaders from around the world shed light on issues troubling the countries of Asia - and possible means to address them.

“The recent bombing in Indonesia took the lives of several people,” said former Indonesian President Megawati Sukarnoputri. “This is not the first attack in our country, and similar attacks are also taking place in Bangkok as well as in Marawi, the Philippines, by a group claiming to be affiliated with ISIS.

“Believe in god, nationalism, internationalism, democracy and social justice - this is the way of life in Indonesia. It can be internationally implemented and it could be the spirit for living together,” she said. “I hope that it would be our common conviction that we could take common action for peace because I believe that none of us want to transfer hatred and conflict to the younger generations.”

“Major movements between South and North Korea were made toward reconciliation in 1991 - we signed a joint formal agreement for reconciliation, nonaggression, exchanges and cooperation; the two Koreas agreed to apply for membership at the United Nations; and North and South Korea made a joint declaration to keep the Korean peninsula nuclear free,” Lee said. “This was because 20 percent of victims of the Hiroshima bombing were Koreans. So we quickly agreed that the best way to keep Korea safe was to not have nuclear weapons on the peninsula.

“I hope that those constructive measures taken almost 30 years ago will furnish the basics for a dialogue,” he added. “The solution is basically a two-state solution, and not for permanent division but for providing a peaceful path in which the two Koreas could work together. We have tremendous hope for that. And this year’s Jeju Forum will also give insights to this.”

Anibal Cavaco Silva, former president of Portugal, suggested that more cooperation between the European Union and Northeast Asia could prove fruitful in promoting peace in the region.

“Can the reinforcement of the relationship between the European Union and East Asia contribute to security and prosperity in the region?” he asked the audience. “I think so. In the current political circumstances a more active role of the European Union in East Asia, apart from the United States, would make it easier for South Korea to have a stronger voice in the issues concerning the security in the region.”

“Two of the four railway networks of Korea are linked to foreign countries. One of the two lines linking Northeast Asia to Paris is the Eastern Line that starts from the Korean port city, Busan, and is linked to the Siberian railway via Najin in North Korea and Khasan station in Russia. The second is the Gyeongeui Line linked to Europe via the China-Manchuria-Mongolia railway,” he said.

“If the two railway lines are restored to form a transportation network in the region and connected to the Silk Road … it would pave the way for the transportation of oil, shale gas and natural gas to the Korean peninsula through the trans-Siberian railway,” he added. “If we utilize the opportunities to the fullest extent, we can mutually benefit each other through supra-regional economic development and exchanges, and finally achieve prosperity for all of Asia.”

Climate change was also focused on during the forum on Thursday.

Gore urged the audience to take action on the climate crisis.

“Those of us alive today have an obligation to the generations that come after us to prevent such conditions from becoming commonplace in the world they inherit from us,” he said. “The exciting news is that we have solutions at hand. We see the exponential increase in the use of wind electricity around the world and solar energy, as well. Chile is in the process of constructing 13.3 gigawatts of solar energy and a majority of vehicles in India will be electric in 15 years. I know that Hyundai and Kia are also involved in changing the energy source.

Reports suggested that U.S. President Donald Trump will likely withdraw the U.S. from the Paris climate agreement, which Gore addressed.

“Right now President Trump is poised to announce in the next two days the decision on whether to pull us out of Paris agreement or not, but the United States is going to continue reducing emissions regardless of what President Trump does,” Gore said. “We are going to win this, the only question is how quickly we will win it and how much damage will be done in the meantime.”