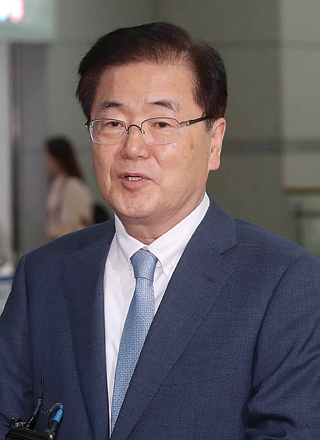 National security officials from the previous administration including the current defense minister were asked whether they intentionally withheld from the Moon Jae-in government information on the delivery of additional launchers for a U.S. antimissile system.

National Defense Minister Han Min-koo and Kim Kwan-jin, former head of the National Security Office of the Blue House, were questioned on Wednesday, a senior presidential aide said Thursday. He, however, refused to disclose where and when they were grilled.

The questioning was a follow-up on Moon’s Tuesday order to investigate the ministry’s failure to brief his team about the U.S. military’s delivery of four additional launchers for the Terminal High Altitude Area Defense (Thaad) antimissile system.

The ministry briefed Moon’s transition team on May 25 and gave another briefing to the national security office the following day, but did not mention that four launchers, in addition to two already installed, were brought in and stored in Korea, the Blue House said. After he learned about the omission, Moon ordered the investigation.

The Blue House said Wednesday morning that it concluded the omission was intentional.

Despite protests by Beijing and Moscow, Seoul and Washington agreed on the Thaad deployment last July. Key components of a Thaad battery, including a radar system and two missile launchers, were installed on a former golf course in Seongju, North Gyeongsang, on April 26, 2017 - less than two weeks before the May 9 election that brought Moon to power. A Thaad battery typically consists of six launchers, 48 interceptors, a fire control and communication unit and radar.

Minister Han is a holdover from the Park Geun-hye administration. Appointed to the post in June 2014, Han remained to head the ministry as Moon’s presidency began without a transition period in the aftermath of Park’s impeachment.

According to the Blue House, Han will leave for Singapore today to attend the IISS Asia Security Summit: Shangri-La Dialogue as scheduled. “We decided that it is appropriate for Han to attend the security talks as planned,” a presidential aide said.

Kim, named defense minister by President Lee Myung-bak in 2010, was retained by Park. She made him the head of the National Security Office in June 2014. Moon named Chung Eui-yong to replace him on May 21.

While Han was directly involved in the ministry’s botched briefing to Moon’s security team, Kim was not, fueling speculation that the Blue House investigation has other intention. The ministry briefed the Presidential Advisory Commission on State Affairs Planning on May 25 and Chung on May 26; Kim was already replaced at the time.

Speculation grew that the Blue House wants to look into the entire decision-making and implementation process of the Thaad deployment.

A massive military reshuffle is almost guaranteed, sources said, calling the situation an echo of a conflict between a liberal president and a conservative military leadership in the past.

In 2004, President Roh Moo-hyun fired Defense Minister Cho Young-gil for having failed to brief the Blue House accurately on a North Korean patrol boat’s crossing of the maritime border. After replacing Cho, Roh reshuffled most of the top military leaders.

“In December 2006, the Roh government planned to push forward strong defense reforms,” a source closed to the Moon administration said. “Roh wanted to take over wartime operational control from the United States and build a strong military. But during the Lee and Park presidencies, defense budgets were actually reduced and the wartime operational control transfer was delayed. The reforms, therefore, were stalled.

“The Thaad deployment was also an important card for Korea in negotiations with the United States and China,” the source said. “But with the rushed deployment, that potential vanished, and Moon was extremely shocked. A massive reshuffle of the military leadership is likely to be the next step.”

Moon’s presidential pledge of defense reforms includes a military restructuring, and observers said replacing the top brass promoted during the past nine years of the Lee and Park presidencies is inevitable. “Demands were strong in the campaign that those from the Army must not be appointed to top posts of the Defense Ministry, particularly those from the Korea Military Academy,” a former campaign member said.

Until now, the military leadership has been dominated by figures from the Army. When Roh named Yoon Kwang-ung as his defense minister in 2004 to replace Cho, it was the first time that the post was given to someone from the Navy.

Moon also showed he would not rely heavily on the military to make security decisions by naming a diplomat, Chung, as head of the National Security Office.

Chung said Thursday that the Thaad probe will end soon and it will not harm the Korea-U.S. alliance. He made the comment before leaving for the United States to prepare for an upcoming Korea-U.S. leaders summit. Moon will meet with U.S. President Donald Trump in Washington at the end of this month.

During his two-day trip, Chung will meet with his White House counterpart, Herbert McMaster, and other senior officials.

“Through a channel at the Foreign Ministry, I offered enough explanations on the background of our investigation to the United States on Wednesday,” Chung said. “I explained that the probe is a matter concerning domestic affairs and it will have no impact on the alliance.”