How to grow jobs

How to grow jobs 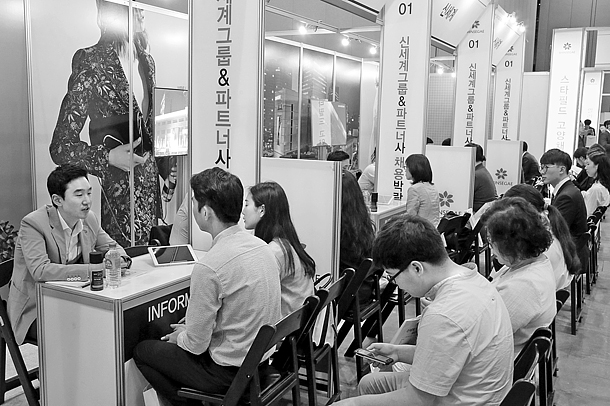 Job seekers have interviews at job fair booths organized by the Shinsegae Group in Kintex, Ilsan, on Wednesday. [YONHAP]

One of my pupils graduated from an elite university and landed a job at a large company. After working two years and earning over 40 million won ($35,620) a year, he decided to shift to a public company. Job placements in public entities were secure and public-sector jobs are getting increasingly popular.

The government is poised to increase the quota for teachers as part of the new president’s campaign promise to boost jobs in the public sector. The number of students is, however, decreasing due to the country’s low birth rate. Teachers are already in over-supply. In elementary schools, teachers are in over-supply to the tune of 17,426. By 2025, 22,000 would become redundant. When including middle school teachers, the pipeline should be streamlined not increased.

This illustrates some of the trickiness of the government’s plan to hire more. Jobs are the output of economic growth, employment elasticity, and labor market flexibility. Public jobs can be increased if the state forces it. But the growth cannot be sustained as it translates into a higher burden on taxpayers. The government would ultimately have to increase taxes and public utility fees. Today’s job seekers would benefit, but that would come at the expense of opportunities for others down the road. Former President Lee Myung-bak had a similar policy. He made public entities lower their base salaries to increase the number of new recruits. Places for people who didn’t go to college were also sharply increased. The private sector joined the move. A few years later, that hiring was reduced.

The goal of the policy is well-intended. It aims to ease some of the inequalities in society and strengthen growth potential. Former President Roh Moo-hyun also placed top economic priority on increasing jobs. He too wanted to solve the wealth polarization through increases in jobs and social welfare. Moon, who served as Roh’s chief of staff, should know very well why the policy failed. The administration promised to deliver 400,000 new jobs a year, but that figure never even reached 300,000.

It is not easy to produce elasticity in employment through economic growth. Industries based on technology and capital have shifted to industries led by automation and digitalization. Still, jobs can grow when the economy picks up speed. The Roh administration learned too late that jobs do not increase unless the economy grows. It tried to speed up growth in 2006 through promotion of knowledge-based jobs in tourism, medical care and tourism.

Jobs also can increase through flexibility in the job market. Discrimination against contract work over salaried jobs is a stumbling block. The Roh administration believed it could solve the problems of insecure contract jobs by introducing the concept of common value and work. But that was easier said than done. It admitted in 2008 that without correcting the annual supply quota and hierarchical system, the common value and work concept could not work.

The lesson from the Roh administration is that forcing companies — both public and private — to create jobs is not a good idea. The administration in its final stage reached that conclusion. Strengthening growth potential by promoting knowledge-based industries and innovative small and mid-sized enterprises is a more lasting and fundamental solution. The wage system should be based on performance instead of seniority, and pay gaps between contract and salaried workers should be solved through the concept of same-pay-for-same-work. Such changes will face strong resistance from the mainstream large companies. But the country’s fate depends on the will to push ahead with such changes. The incumbent administration must see through the work Roh partially began.

*The author, a former editorial writer of the JoongAng Ilbo, is an adviser to the Korea Institute of Finance.