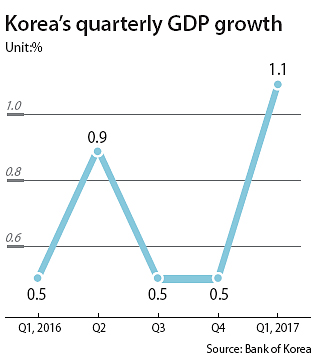 Korea’s economy grew faster than expected in the first quarter, buoyed by increased exports, construction and facilities investment, according to preliminary data issued by the central bank on Friday.

The country’s gross domestic product gained 1.1 percent in the January-March period from the previous quarter, more than doubling from a 0.5 percent expansion three month earlier.

The latest figure is the highest since the third quarter of 2015. The economy has grown less than 1 percent each quarter in the past five quarters.

From a year earlier, GDP increased 2.9 percent during the first three months of the year.

The upbeat result is 0.2 percentage points higher than an earlier estimate thanks to higher exports and additional investment in construction and intellectual properties, two sectors that pushed overall growth.

“The growth in the first quarter was driven by the private sector,” said Kim Young-tae, head of national accounts division at the bank, a contrast to the third quarter of 2015 when the government’s supplementary budget primarily contributed to expansion of GDP.

“The quality of growth has improved compared to 2015’s third quarter when the extra budget largely backed growth,” he said.

Facilities investment was helped by additional investment in machinery, including semiconductor manufacturing equipment, as the industry has shown stellar performance thanks to robust worldwide demand for computer chips.

The Ministry of Trade, Industry and Energy said Thursday that Korean exports climbed 13.4 percent in May compared to a year earlier, thanks to strong sales of locally-made computer chips and data storage systems.

The share of manufacturing in GDP increased 2.1 percentage points from the previous quarter, led by semiconductors and machinery.

Construction output jumped 5.3 percent in the first quarter as the number of residential and commercial real estate projects continued to grow.

The service sector saw a relatively meager increase of 0.2 percent due to tepid domestic consumption. The central bank said consumer spending grew only 0.4 percent in the first quarter.

Consumer sentiment, though, has begun improving, which could lead to better spending numbers for the second quarter. Consumer confidence in the Korean economy reached its highest in three years in May, largely owing to hopeful expectations for the newly-elected president, Moon Jae-in.

The country’s real gross national income expanded 2.7 percent from a quarter earlier due to improved terms of trade.

The current momentum is expected to continue as an earlier report showed exports have been posting a growth for seven straight months. This has been signaling possible 3 percent growth by the end of the year.