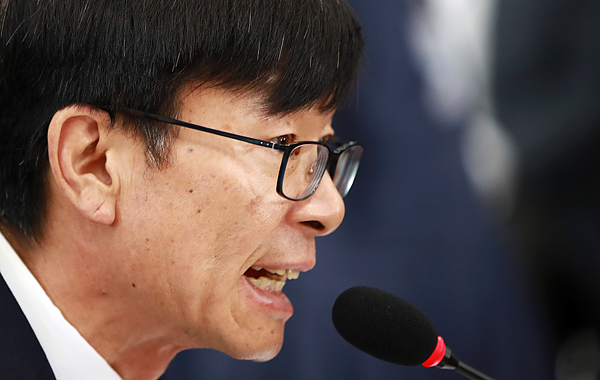 Kim Sang-jo answering during his confirmation hearing in Yeouido, Seoul on Friday. [YONHAP]

The nomination of Hansung University professor Kim Sang-jo to lead the nation’s business watchdog, the Fair Trade Commission, has become uncertain as he was questioned during a confirmation hearing on Friday.

The Hansung University economics professor, whose nickname is “Chaebol Sniper” for his anti-conglomerate views, is being questioned by lawmakers at the National Assembly for two days.

Kim is the first among the nominees that President Moon Jae-in picked to serve the government economic department since taking office in mid-May.

Lawmakers raised questions about the hiring of his wife as an English lecturer at a public school despite her qualifications failing to meet the required criteria, as well as the use of a fake residential address, his son’s alleged special treatment during his mandatory military service and allegations that Kim plagiarizing some of his work.

Questions on his son’s military service were not raised on Friday.

Although he denied most of the allegations, he did admit to some, but claimed they were unintentional.

Kim’s wife, when applying for the public school job four years ago, turned in her English equivalence test, which was just one-point short of the minimum acceptance level. However, she was hired at the school and renewed her contract this year. Kim said it was a mistake by the education office that gave the approval and that he had no hand in helping his wife get the job.

He also told lawmakers that his wife rarely told people who her husband is.

“How could a wife talk about a husband who has a nickname ‘Chaebol Sniper?’” Kim asked.

Kim also said while he lived in the United Kingdom during his sabbatical, he was registered in an apartment in Mok-dong. However, in February 2005, his residency changed to an apartment in Daechi-dong, where prices have been going up due to rumors of reconstruction.

Kim, however, said he did live in that apartment because his wife was being treated for cancer in the nearby hospital.

He also admitted to lowering the value of the apartment when selling, which was previously a common practice used to avoid paying higher taxes.

Kim apologized for this but said it was not intentional profiteering.

After the hearing on Friday, the Liberty Korea Party demanded that Moon retract his nomination of Kim.

“Nominee Kim Sang-jo is like an endless treasure of controversies,” said the party’s spokesman Chung Young-ki. “With only the suspicions that have been raised so far, it would be inappropriate for him to lead the FTC.”

The People’s Party, which until Wednesday demanded that Kim quit voluntarily, has taken a step back, asking him to answer questions with sincerity while turning in data that has been requested.

“As the people have been disappointed by the track record of Professor Kim Sang-jo, a civic activist who has monitored the chaebol, in having real estate transactions in regions that received much attention during the real estate boom, such as Mok-dong, Daechi-dong and Chungdam-dong, we expects honest explanation,” said Choi Myung-gil, the party’s spokesman.

The ruling Democratic Party said the confirmation hearing should be focused on verifying whether Kim is the appropriate person to execute the family-owned conglomerate reform and the old practices that have negatively affected the Korean society and businesses.

During his campaign, Moon promised to exclude anyone involved in any one of five corruptions: dodging military service, speculating on real estate investments, using a fake address, tax evasion and plagiarism.