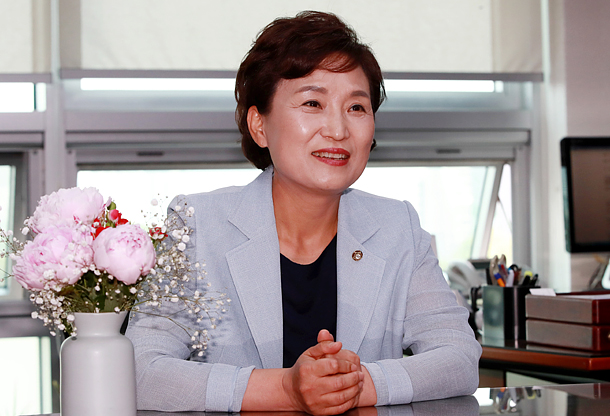 The real estate market is nervous about Democratic Party lawmaker Kim Hyun-mee being nominated as Land Minster by the Moon Jae-in administration.

As a lawmaker, Kim has consistently blamed the market for exacerbating wealth inequalities in Korea, and opposed measures to stimulate the market.

She may try to stabilize it and restrict lending for real estate.

Kim has never served on the National Assembly’s Land, Infrastructure and Transport Committee. She spent most of her years as a lawmaker serving on the Strategy and Finance Committee. In her three terms, 67 of the bills that she helped author - out of a total of 1,683 - were related to land and transportation.

Those bills largely focused on housing issues for the poor tenants. One bill she submitted last July would give low-income tenants the right to request a renegotiation on an apartment lease. The bill is stuck in a committee at the National Assembly.

President Moon earlier this year picked up it and used it as one of his campaign promises.

She submitted a bill banning excessive noise in residential areas and one that clarifies the responsibility of the government in regards to creating quality residential life.

Kim was strongly opposed to the Park Geun-hye administration’s decision to ease qualifications for mortgages - particularly the loan-to-value (LTV) and debt-to-income (DTI) ratios - in July 2014, which helped revive a lukewarm real estate market. The LTV ratio was eased from 60 percent to 70 percent while the DTI ratio was raised from 50 percent to 60 percent. The government’s decision to ease the debt limit was extended twice. The easing of the debt cap ends at the end of next month.

At the National Assembly last year, Kim argued that the conservative government was responsible for household debt increasing by 564 trillion won ($502.3 billion) between 2008 and 2015.

“The first priority in recovering our economy is to solve the household debt problem and in order to do so, we have to bring back regulations restricting debt,” Kim said.

In a 2012 debate organized by Kim, she argued that there was a bubble in the real estate market that required limits to mortgages and syndicated loans that apartment investors borrow in groups.

She said there should be a law that regulates excessive loans, and that all loans that don’t consider the income and future profits of the borrower should be cancelled.

She also raised the possibility of the government buying apartments of investors who are “underwater” - the value of their apartments has fallen so much that it’s smaller that the size of their mortgages - and turning them into long-term government-owned apartments.

In a book Kim published in 2013, she pointed out that many Korean baby-boomers are forced to start small businesses after retiring from office jobs, using their apartments as collateral for loans. When the businesses fail, they lose everything, she wrote.

After Kim was nominated to head the Land Ministry, she immediately raised the issue of household debt.

During a press briefing Tuesday, she blamed the easing of the LTV and DTI ratios by the previous administration for today’s mountain of household debt

She said it will be more difficult to get a mortgage when she leads the ministry. But some industry analysts believe it’s unlikely she will push for hard-line regulations to tighten the real estate market.

“Kim served as the political affairs secretary during the Roh Moo-hyun administration, which was a time when property values surged after the government tried to regulate the real estate market,” said a construction company official who requested anonymity.

“She could try to regulate under the goal of stabilizing the market, but as she understands the side effects, she will unlikely try to implement too many regulations.”

Shim Gyo-un, a real estate studies professor at Konkuk University, said powerful regulations will only make matters worse, as the housing market is in bad shape except in a few pockets.

“If [Kim] plans to implement regulations it should be approached sensitively in different regions like precision missile rather than dropping a nuclear bomb that affects the overall market,” Shim said.