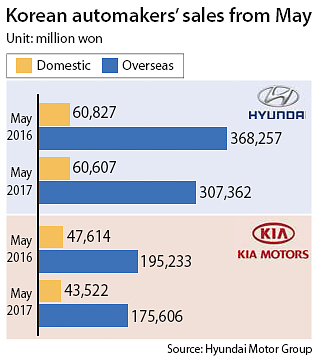 Sales of major automakers in Korea suffered in May, affected by falling demand from overseas.

Top automaker Hyundai Motor saw its monthly sales tumble 14.2 percent year on year and its sister company, Kia Motors, experienced a fall of 9.8 percent. Hyundai sold a total of some 368,000 cars worldwide in May - about 61,000 in Korea and 307,000 overseas.

SsangYong Motor, a Korean sports utility vehicle maker, also witnessed its sales retreat 7.0 percent compared to a year before. Sales of its flagship compact SUV Tivoli fell across the board - 14 percent in the domestic market and 54 percent overseas. SsangYong’s outbound shipments fell 48 percent as a result. The sale of the new G4 Rexton, however, jumped over six times domestically.

A spokesperson from Hyundai and Kia pointed to the decrease in production from manufacturing plants outside Korea due to fallen local demand. SsangYong referred to the global recession in the auto industry as the reason behind the drastic fall.

Local analysts shared a similar sentiment. Some cited Korean companies’ continuous struggle in China, stemming from tension between Beijing and Seoul over the latter’s decision to deploy the U.S. antimissile system Thaad, as what dragged down the automakers’ global sales.

“While sales [of Hyundai Motor and Kia Motors] fell for three consecutive months since March due to the impact of the Thaad issue, the fallen rate recorded a double-digit figure for two straight month,” said Lee Sang-hyun, an analyst with IBK Investment & Securities, who noted that production from overseas factories fell 24.9 percent for Hyundai and 17.8 percent for Kia.

Lee added, “Domestic demand will be sluggish in June, but Thaad-related regulatory retaliations will be somewhat relaxed with the Moon administration newly in place and the sale of vehicles produced abroad will improve after June.”

Chang Moon-su, an analyst from Kiwoom Securities, also maintained an optimistic view and said the sales slump in China is slowing.

Some experts, however, said it is premature to anticipate Korean automotive companies’ sales in China will recover any time soon.

Yim Eun-young, an analyst at Samsung Securities, said, “sales of [Hyundai and Kia] vehicles made in China are estimated to have fallen 62 percent year on year… the fundamental reason is that they have lost the competitive edge in the market.”

According to ChinaAutoWeb, which provides statistics on the Chinese auto industry, Hyundai’s Elantra and Kia’s K3 were ranked as the 11th and 12th most popular passenger vehicles in China in February. But by March, they fell below 40th in the ranking and remained there in April.

“Sales in China will be sluggish and will remain below 40,000 units, a 59 percent year on year fall, in June,” estimated Yim.

Hyundai and Kia’s sales also fell in the United States, down 15.5 percent.