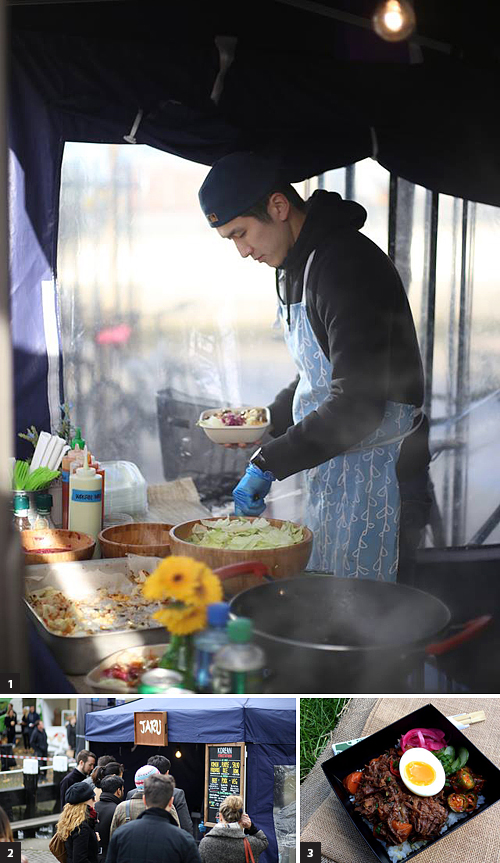 Kim Geon-mu, 30, returned home to Korea after studying overseas, unable to speak the language he had studied. After his military discharge, he pushed back his graduation date from his provincial university and went on a working holiday to find his “true self.” Drawn by the unknown, he chose Ireland as his destination, despite being only familiar with the beer, Guinness.

Seven years later, Irish Kimchi debuted at SuperValu, one of the major three supermarket chains there.

Though he left out jeotgal, or fermented fish, for the vegetarians, it remained hot and exuded the flavors of the real thing. The reaction was unexpected.

Locals enjoyed it in sandwiches or for pasta sauce. It wasn’t cheap at 3.8 euros ($4.26) for a 180 gram pack, yet 2,300 or so packs are now sold monthly. After beginning with three locations, there are now 23 SuperValus where one can find the product.

Irish Kimchi was started by Kim, founder of the Korean food company Jaru.

“I wanted to throw myself into a place where no one knew me,” says Kim. “If it was going to happen, I was going to let happen.”

Despite his poor English and his empty pockets, Kim arrived in Dublin, Ireland, in high spirits in 2010. He shared a 300,000 won ($266) room with three other roommates just above a rock cafe and had to wear earplugs to get through the night.

Within three months, he found a part-time job at a Korean restaurant washing dishes and cleaning floors.

“It wasn’t an easy time,” he says. “But I felt something strange when I saw Irish people enjoying doenjang (fermented soybean paste) and ssambap (leaf wraps).”

Observing locals eating Korean food, Kim came upon a desire to cook for the first time.

In the two years he spent at the part-time job, he became practiced in the use of a kitchen knife, having never grabbed one in his days back home.

Kim made up his mind to learn the culinary arts and was accepted into the Dublin Institute of Technology for hospitality management.

Though he found minor success, eventually climbing to the position of manager at the restaurant, he soon acted on his epiphany and left the job to become a kitchen aide at a French restaurant.

“I thought I had to start with the French if I wanted to study cuisine,” said Kim.

During the day, he studied at the university, and at night, he familiarized himself with restaurant work. To supplement his income, he found himself various odd-jobs for recording events or interpreting.

It wasn’t easy to come up with the 12,000 euro tuition for the academic school year.

“When I had the time, I ran to the library and looked for academic papers or magazines on cuisine to read,” he recalls. “I read it all, especially if there was a book pertaining to Korean cuisine.”

It wasn’t all theory, as his restaurant work gave him the opportunity for practical training.

“I familiarized myself with various tastes as I poured myself million-won wine which customers left unfinished,” he says. “It was because if it wasn’t then, it was definitely something I could never experience.”

Soon, he earned a full scholarship at the university.

“It was the first time since I came to Ireland that I had cried so hard,” says Kim.

Last year, Kim graduated at the top of his class with his thesis, “Korean food in the Irish market.” Though he was advised to pursue a doctorate, he decided to go into business instead.

“I had the feeling that if I didn’t do it now, I wasn’t sure when I could,” says Kim. “I also started cooking to show foreigners delicious Korean food.”

He started Jaru, his Korean food business, with two colleagues in May of last year.

Bibimbap and bulgogi were already widely known in Ireland, so Kim focused his attention on other Korean staples such as doenjang and galbi (grilled ribs).

Last September, his dishes first appeared at a food market on a busy Dublin street. Three months later, word of mouth had made it a hit.

Even in pouring rain, people line up for his food.

As a result of his success, Kim’s dishes qualified for SuperValu’s artisan food industry program.

“I heard doubts about whether the business could do well, with only about 1,000 Koreans in Ireland,” he says, adding that his eventual goal is to “cross Ireland and spread Korean cuisine over the entirety of Europe.”