Meet the man who made Moon’s shoes

Meet the man who made Moon’s shoes 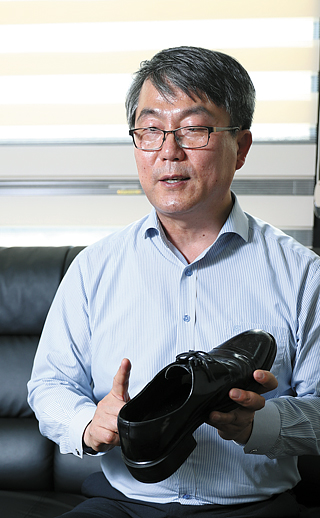 “I never imagined President Moon Jae-in would still be wearing the shoes he bought from us five years ago at a sales event,” says Yu Seok-yeong, the former owner of Scene of Making Shoes, a social enterprise that went out of business four years ago.

On May 14, Yu received a call from the Blue House secretary’s office asking if Moon could buy another pair of shoes. Yu replied that his business had shut down and began to cry.

His shoe brand, AGIO, began producing and selling handmade shoes on Jan. 1, 2010. Prior to this, Yu, who has a visual disability, was employed as the head of the Paju Welfare Center for the Disabled since 2006. During that time, he learned of the lack of available positions for the hearing impaired and got an idea.

“There were more hearing-impaired people working as cobblers in the 1980s than one would expect,” he says, “but then they suddenly all disappeared.”

Gathering six hearing-impaired employees, he rented a 250 square meter (2,690 foot) space in Paju, Gyeonggi, and invited a cobbler with 40 years of experience to help him begin his company.

Within three months, he had five types of shoes. With the help of modeling by close friend and novelist, Rhyu Si-min, and other public figures, the initial prospects were encouraging. A shoe designer even volunteered his expertise.

“I wanted to live happily making shoes,” says Yu, “but the market wall was too high.”

He thought if he diligently crafted handmade shoes with good material, he would have a breakout moment. Making light and comfortable shoes, Yu focused on quality, using cow and pig leather.

But business was difficult, as consumers didn’t like the idea of purchasing shoes made by people with disabilities.

“We needed to come up with new products according to the trends,” says Yu, “but with low sales, it was difficult to focus on development.”

In the end, the company he ran for three years and eight months shut down in August 2013.

“I’m not sure whether the hearing impaired, those who learned for three years the skill of making shoes, will come back,” he says. “My hope is that they will come back.”

Since last June, Yu has been involved with a Gyeonggi business that sells products such as office supplies produced by people with disabilities.