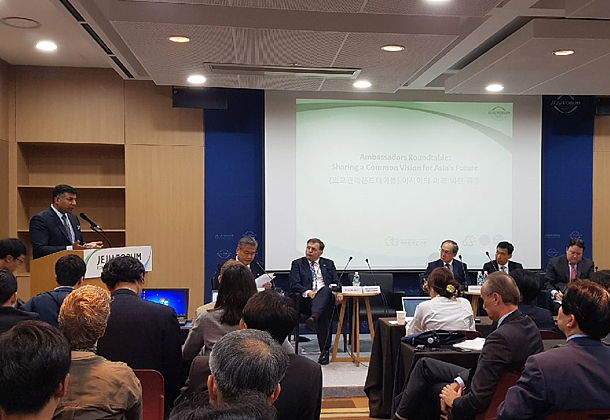 Ambassador of India to Korea Vikram Doraiswami presents his remarks at the ambassadors’ roundtable of the 12th Jeju Forum for Peace and Prosperity at the International Convention Center Jeju in Seogwipo on Thursday. [JUN MIN-KYU]

SEOGWIPO, Jeju - Ambassadors to Korea at the 12th Jeju Forum for Peace and Prosperity in Seogwipo expressed hope for improved bilateral relations with the Moon Jae-in administration.

“The Jeju Forum is being held in the third week after President Moon started to work and it’s a very important junction,” said Japanese Ambassador Yasumasa Nagamine during the ambassadors’ roundtable at the International Convention Center Jeju on Thursday. “Japan looks forward to closely working with the Korean government to create future-oriented bilateral relations.”

Moon’s special envoy to Japan, Rep. Moon Hee-sang of the Democratic Party, told Moon upon his return from Tokyo last month that Japanese Prime Minister Shinzo Abe expressed hope to hold a summit with Moon as soon as possible.

“This is an opportunity for two leaders to not only develop personal rapport but also to sit down and to discuss how better to further strengthen shared efforts to roll back North’s nuke and missile efforts.”

Moon is scheduled for his first bilateral summit with U.S. President Trump in Washington this month.

The top envoys of the United Kingdom, Australia, India, United States and Japan gave their views on “Sharing a Common Vision for Asia’s Future,” the theme of this year’s Jeju Forum.

“It is safe to say that the international strategic environment seems more uncertain and variable than at any other time since World War II. There is a major shift in the international environment and navigating has become more complicated in the multipolar world,” said Australian Ambassador James Choi. “We have seen many strong statements from Trump on the North Atlantic Treaty Organization alliances, China and the DPRK, and many have rushed to give answers on what U.S. foreign policy will be like. But I think too many people are scaring themselves by predicting an apocalypse.”

Choi added, “Australia and Korea are natural partners as like-minded democracies that share an agreement on rule of law, and enhancing cooperation with other like-minded states in the region will be critical. Australia and Korea need to work more closely in forging a common view on the regional institutions and rules to respond to future challenges in Indo-Pacific region.”

The ambassadors also expressed their expectations that close trade relations will continue regardless of changing circumstances back home or possible complications down the road.

“I was greatly encouraged when, immediately after the Brexit vote, the Korean government said it wants to maintain a free-trade relationship with the U.K., even after the Brexit, and I think it is in both our interests to do so,” said British Ambassador Charles Hay. “We have now established a working group who will take forward that work … but, of course, we can only start formal FTA negotiations after we’ve concluded on our relationship with the European Union.”

He added, “The U.K. will remain in the EU until March 2019. The reality is that there is not enough time to negotiate a new FTA [with Korea] so we’ll aim to find some way of continuing provisions of existing EU-Korea FTA. It’s in both sides’ interest to come to an amicable agreement in near future because we are each other’s most important trading partners.”

“We believe that our energy trade with the Republic of Korea will be an important aspect of relations going forward. This summer, for example, we have the very first shipment of liquid natural gas from the United States to Korea,” Knapper said. “We’ll also be developing future technology that will enable us to follow the model of Jeju Island, in which we work on green and sustainable energy to help fight climate change.”

Some suggested it is time for Asian nations and other stakeholders in the region to bridge non-traditional partnerships with powers outside of the immediate neighborhood in changing dynamics in relations.

“In the next year or two I think we’d see resets in China-U.S. relations, U.S.-Russia relations, India-China relations, Korea and its neighbors, Japan-Russia relations and even within and around Asean - these fundamental players around the Indo-Pacific are in the stage of reset,” said Indian Ambassador Vikram Doraiswami. “We are now looking at [an age of] poly-sided relationships in Asia, and we’re all going to have to invest in newer partnerships that go beyond existing mechanisms. We all must start thinking out of the regional boxes.”

“Prime Minister Abe proposed a strategy last year in Kenya, Nairobi, which is based upon the conviction that Asia will continue to play a vital role as the most prominent growth center [while] Africa continent is providing full potential for further development in the global sphere,” Nagamine said.