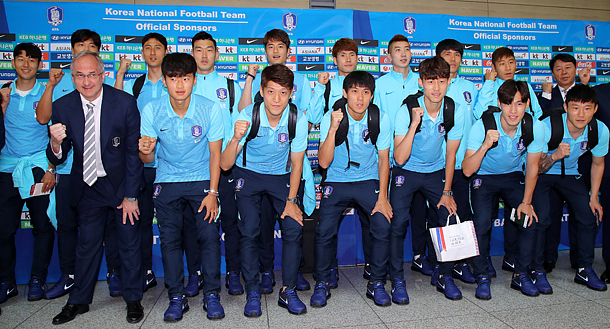 The Korean national football team pose for a picture before departing Saturday to the United Arab Emirates for a tune-up match against Iraq. [YONHAP]

The Korean national football team arrived in the United Arab Emirates on Sunday morning for final training, including a tune-up match against Iraq, before the final FIFA 2018 Russia World Cup qualification match against Qatar.

The Korean national football team’s match against Qatar is considered the most important in determining their advancement to the World Cup. The team barely is maintaining its second place in group standings with one point. Korea, who have played seven of their 10 matches, disappointed fans as they struggled against China, Syria and Qatar, considered the weakest teams in Asia, in their previous group matches.

“The leaders always get evaluated based on the result of the match,” Uli Stielike, head coach of the Korean national football team said upon arrival at the Dubai airport. “There are a lot of things the leaders do but we only get recognized for the result.”

Korea never had an easy win or was dominant against a certain team. Even in a match where they scored multiple goals, they struggled in defense and barely won by one goal. From this, there has been anxiety among fans that Korea may not make it to the World Cup.

In addition, there’s Stielike’s comment: “I think it’s due to the fact that we don’t have a striker like Sebastian Soria,” after the team’s 1-0 loss against Iran, which turned fans’ trust of Stielike into criticism.

That said, the team’s upcoming match against Qatar, the bottom-ranked team in Group A, is a must-win for Stielike to regain the trust of Korean football fans and to increase the team’s chance of advancing to the FIFA World Cup for the ninth consecutive time. Aside from just a win, it’ll be an important task for Stielike to show how the team has improved.

In the next nine days until the match against Qatar the existing players will have to meet with the rest of the team and start training with them as the 24-man roster at the upcoming match is almost a new squad. Since some of the players were previously still tied to their club schedule, members like Hwang Hee-chan and others that play in the foreign league, will rejoin the team for the first time in a few days.

Along with the 13 players that started training in Korea, two Jeju United players, Hwang Il-su and Lee Chang-min, were the first to join the national team.

“Qatar is a low-ranking team but we can’t consider them an easy opponent,” Ki Sung-yueng, captain of the Korean national football team, said prior to their departure at Incheon International Airport, according to Yonhap. “The national team lacks an away victory. We will try to win this time to raise our hopes.”

The Korean team has yet to win an away match in the world cup qualifiers. Their best finish was a tie against Syria. With only three games remaining in the group matches, Korea is ranked second with 14 points, only one point ahead of Uzbekistan and four points behind Iran.

Prior to their final qualification match, the team will be training and play in a tune-up match against Iraq on Saturday in the UAE. Korea will then be heading to Doha to play against Qatar on June 14.