A buttoned-up look at French history : Exhibition at National Museum of Korea looks at art on fashion’s tiniest accessory

A buttoned-up look at French history : Exhibition at National Museum of Korea looks at art on fashion’s tiniest accessory 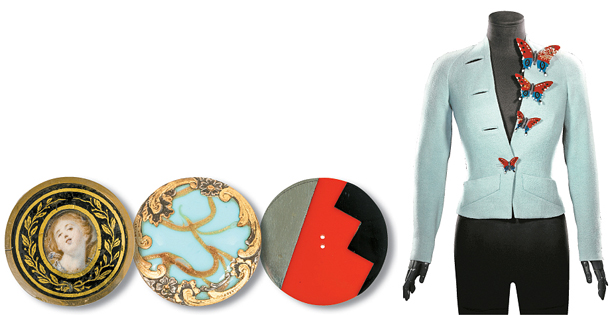 A special exhibition at the National Museum of Korea delves into the history of buttons in France between the 18th and the 20th centuries, and its implication in fashion and society as well. (From left) A button with a portrait of a woman in Fragonard’s style (1760s); An art nouveau button (1900s); A colored button (1920s); And a jacket from the summer 1937 collection of Elsa Schiaparelli (1890-1973). [NATIONAL MUSEUM OF KOREA]

If you are a fan of fashion and history, an exhibition at the National Museum of Korea titled “Unbuttoning French Fashion from the 18th to the 20th century” is worth a visit.

As the title implies, the show tells the story of French fashion through buttons, an unlikely medium.

Buttons, which could be perceived as a trivial fashion item, are “the smallest canvas for one’s artistic expression,” curator Baek Seung-mi told reporters in a press preview held on Monday.

But for buttons to become a canvas, they went through quite a journey.

“In the 18th century, it was used to symbolize one’s status for the royals and the aristocrats, and to reflect an ideology for the French Revolution,” Baek said. “Then in the 19th century, it stood for the identity of the bourgeoisie.”

It was in the 20th century that buttons became a cherished canvas for artists and designers. They include: Elsa Schiaparelli (1890-1973), a legendary designer that Coco Chanel (1883-1971) considered her only competition; jewelry designer François Hugo, who is also the grandson of Victor Hugo (1802-85), the author of “Les Misérables” (1862); as well as Alberto Giacometti (1901-66), a Swiss sculptor.

The exhibition unfolds in a chronological manner.

In the section about the 18th century, which is considered the golden age of buttons, you will find a button from the 1760s that features a portrait of a woman in so-called Fragonard’s style, referring to Jean-Honoré Fragonard (1732-1806) the French painter. All sorts of buttons were made in this period, ranging from those featuring portraits and genre painting to caricatures.

In the 19th century, which is marked by industrialization within France and imperialism in outside world, buttons were made for soldier’s uniforms; and were an expression of identity for the bourgeoisie. But buttons also became a means of expression for cultural phenomenons that swept France like dandyism and art nouveau. Buttons also became an industry. There are statistics that in 1878, about 30,000 people in France alone had button-making as their profession.

But the biggest change in the history of French buttons occurred in the 20th century. In this period, two World Wars took place and women’s participation in society was more active than ever. They needed clothes that were functional.

Paul Poiret (1879-1944), a leading French fashion designer, helped liberate women from corsets. One of his dresses, known as the Melody Robe, is on display. “You can see one button just below the neckline,” Baek said. “The dress would’ve been a completely different piece if it did not have that button,” she said, adding that Poiret knew how one button could entirely change a dress’s look.

The exhibition displays a total of 1,800 items. The buttons were all gathered by Loïc Allio, a button collector. His collection was recognized as “Work of Major Heritage Interest” by the Consultative Commission on National Treasures in 2011. In 2012, the Musée des Arts Décoratifs in Paris acquired the collection. In 2015, the museum held an exhibition titled “Déboutonner la mode” displaying over 3,000 buttons.

The following year, the Paris museum suggested that the show be held in Seoul, according to officials of the National Museum of Korea.

The show was slightly modified to help Koreans better understand the fashion and history of France, Baek said.

The “Unbuttoning French Fashion from the 18th to the 20th Century” exhibition runs until Aug. 15. Admission is 9,000 won ($8) for individuals aged 24 or older; 8,000 won for middle school, high school and college students; 7,000 won for elementary school students; and 5,000 won for those aged over 65 or children between the ages of five and seven.

Opening hours are 9 a.m. to 6 p.m. on weekdays, but the hours are extended until 9 p.m. on Wednesdays and Saturdays to encourage nighttime visits. Opening hours on Sundays and holidays are 9 a.m. to 7 p.m. The venue is close to Ichon Station (lines No. 1 and 4), exit 2. For more information, call 1644-2625 or visit museum.go.kr or unbutton.modoo.at.