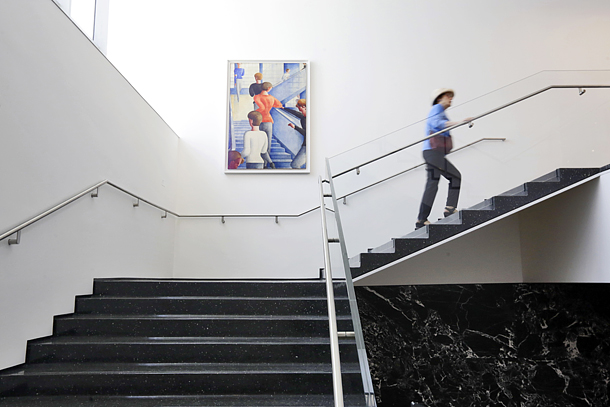 Oskar Schlemmer’s “Bauhaus Stairway,” left, adorns the Bauhaus Stair in the Goodwin and Stone Building at the Museum of Modern Art in New York, Friday. The museum is dramatically expanding and reconfiguring its midtown Manhattan galleries. [AP/YONHAP]

NEW YORK — New York’s Museum of Modern Art is boldly expanding its midtown Manhattan home that draws more than 3 million visitors annually from around the world — including those who came Friday to see the first completed phase of the $450 million project.

Spread over three floors of the art mecca off Fifth Avenue are 15,000 square feet (about 1,400 square meters) of reconfigured galleries, a new, second gift shop, a redesigned cafe and espresso bar and, facing the sculpture garden, two lounges graced with black marble quarried in France.

The expansion will allow more of the museum’s collection of nearly 200,000 works to be displayed.

The project also will provide 25 percent more space for visitors to relax or have a sit-down meal.

The museum building, which opened in 1939, now nearly fills an entire city block and showcases works by artists including Pablo Picasso, Henri Matisse, Andy Warhol, Vincent van Gogh and Frida Kahlo, to name just a few from the permanent collection.
The complex fuses original architecture by Philip Goodwin and Edward Stone with Philip Johnson-designed additions in 1951 and 1964 and a new section by Argentine native Cesar Pelli in 1984, topped in 2004 by Yoshio Taniguchi’s $425 million expansion and renovation.

“We’re riffing off the DNA of MoMA’s history,” said Elizabeth Diller, whose Boston-based firm, Diller Scofidio + Renfro, was hired for the project, working with the Gensler firm in San Francisco.

“This work has required the curiosity of an archaeologist and the skill of a surgeon.”

“The Museum of Modern Art’s renovation and expansion project will seek to reassure and surprise,” Lowry said.

Architecturally, he said, MoMA is “opening up, so you’re aware of the city” — by bringing the urban turf closer to visitors through an all-glass facade facing West 53rd Street, more window panels elsewhere and a rooftop lounge with a terrace.

Some galleries will be pliant, with partitions that can drop or be lifted, and ceilings of varying heights, depending on exhibition needs. Added studios and galleries will be set up for performances or film screenings.

The current, double-height entrance lobby will be reconfigured to ease visitor congestion that often results in lines reaching out onto the sidewalk. Demolition starts this month, and visitors will have to use alternative entrances.

Providing easier access inside is the historic Bauhaus staircase that was extended to reach down to the first floor.

The ongoing work includes some unseen improvements, with energy and water conservation that puts MoMA on track for the LEED Gold certification, a rating system that evaluates a building’s environmental performance.

MoMA has raised private funds for the nearly half-a-billion-dollar project; entertainment magnate David Geffen alone donated $100 million.
Admission is $25, but the ground level with its galleries is open to the public free of charge.

In the newly completed area, the first exhibition opens June 12. “Frank Lloyd Wright at 150: Unpacking the Archive” will celebrate the 150th anniversary of the American architect’s birth.