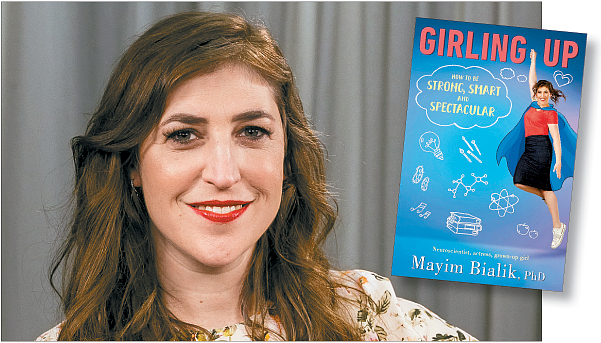 Actress and author Mayim Bialik poses for a photo in Los Angeles on May 23. Bialik wrote “Girling Up: How to be Strong, Smart and Spectacular,” a wide-ranging handbook on navigating the emotional and physical hurdles of growing up. [AP/YONHAP]

Mayim Bialik plays smart on TV’s “The Big Bang Theory” and is smart in real life, with a Ph.D. in neuroscience as evidence.

She joins her intelligence with experience in “Girling Up: How to be Strong, Smart and Spectacular,” a wide-ranging handbook on navigating the emotional and physical hurdles of growing up. It’s as forthright as Bialik herself is in conversation, with comic book-style graphics adding a lively touch.

The book’s roots stem from “The Big Bang Theory” episode in which her character, Amy, and boyfriend, Sheldon (Jim Parsons), lose their virginity. That prompted Bialik to write an essay for her website, Grok Nation, on what it’s like to be a late bloomer and “how complicated intimacy can be on TV and in real life,” she said.

Her discussion of modesty, absent religion or politics, caught the eye of publisher Philomel Books and “Girling Up” followed, said Bialik, who recently signed for two more years of “Big Bang Theory.” She’s also a mother of two boys, ages 8 and 11.

In an interview with The Associated Press, Bialik discussed what’s covered in the book, which was reviewed by a school counselor, an obstetrician and a neuropsychologist.

Q. In “Girling Up,” you write that you considered it important to write a holistic guide. Beyond calling on your own experience, what research was required?

A. I don’t mean to sound arrogant at all, but there wasn’t a lot of research because I literally wrote the book of my life. The science and the nutrition, all that stuff, all the stuff about learning and coping, that was gathered from the perspective of someone who’s been in therapy a long time and has had to do a lot of introspection. And I was trained as a scientist.

What ages is it intended for?

We’re saying 11 to 18, and anyone who loves someone in that age bracket.

When you were that age, where did you get information such as this?

I didn’t. My mother was raised in a very religious household, her parents were immigrants from Eastern Europe. We didn’t talk about these things. I learned about it as I got older. I was an exceptionally late bloomer. I don’t necessarily think there was a problem with that, but I didn’t want to present that as the only way to be in this book. But it took me a long time to understand and come to terms with a lot of aspects of being female.

The book tells readers there are different ways to look, to be educated, to get jobs, even how one’s breasts may develop. Why was it important to you to present such a range of possibilities?

What do you consider the key takeaways from your book?

The first thing is knowing the basics of how your body works and how the brain works. You are in charge of your body. ... The notion of understanding the broader concept of what is being female is very important. And a realistic set of expectations of what your life can look like. This is not a book that’s very sparkly and shiny and says you can do anything you want as long as you put your mind to it. I didn’t like those books when I was 14 and I don’t like those books now as a woman. You don’t get to do everything — you get to choose what your everything is.