Why Citibank is cutting branches

Why Citibank is cutting branches 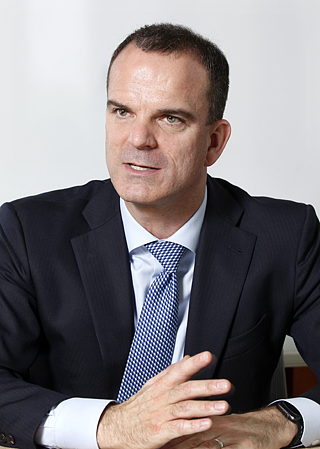 Brendan Carney, head of Citibank Korea’s consumer banking, during an interview on Tuesday at the bank’s offices in central Seoul. [PARK SANG-MOON]

When Citibank Korea said earlier this year that it would close nearly 80 percent of its local branches, the announcement turned heads.

With more bank users going online and mobile, the U.S.-based financial institution has been at the forefront of ditching traditional brick-and-mortar branches in favor of digital banking.

Brendan Carney, head of consumer banking at Citibank Korea, said branch service has become less relevant to customers because the vast majority of them make transactions without ever visiting one. Nonetheless, he said the bank wants to keep all of its employees through a staff reshuffle. Still, the shift has invited opposition from the bank’s labor union, which fears the move will lead to layoffs or relegation to less desirable positions like call-based consulting. The union also warned that consumers, especially those outside Seoul, could be at a disadvantage since some regions will not have a single branch after the closings.

Citibank’s Korea operation is its third largest by asset size, but its net profit has been on the decline due largely to decreased profit from interest. In 2010, it posted profit of 315.6 billion won ($281 million) and revenue of 1.5 trillion won. By last year, profit had fallen 32.8 percent to 212.1 billion won, and revenue slid 24.7 percent to 1.1 trillion won.

The Korea JoongAng Daily recently sat down with Carney at the bank’s offices in central Seoul to learn more about its digital banking strategy and future focus. Below are edited excerpts from the interview.

Q. What made Citibank decide to close a number of its branches?

A. We have a transformation where we plan to go from 126 consumer banking branches to 25 because we see that branches are less relevant to our customers today. Our customers visit their branch 0.4 times per year. Ninety percent of our customers have not visited a branch at all in the last 12 months.And even when customers do visit a branch, it is generally not because they want to but because we force them to. They call or they go online and they can’t get done what they want to get done in those more convenient channels so they must come to the branch. Our goal is to never require customers to come to a branch.

Also, we are not shrinking our business. We are maintaining the number of relationship managers and other banking staff, but we are reorganizing them in a way that allows us to serve our customers better.

Still, only around 20 percent of those over 60 use mobile banking, and they might prefer to go to a branch. What do you make of the view that such moves could marginalize older people or those who are not used to mobile banking?

One of the reasons that the older generation hasn’t really adapted to mobile banking is because they can be so complicated. You have the public certificate and perhaps 20 apps for one bank. With our one-app strategy, we are trying to simplify mobile banking. You can log in with a fingerprint if you want, and you don’t need a certificate. We are optimistic that the most stubborn non-mobile banking users will use the app.

What makes Citibank’s app or digital services different from others?

One of the benefits of being a global bank is that we have been seeing mobile banking evolve globally across different countries. We have applied best practices from advanced mobile banking markets like Singapore, Hong Kong and Poland. And the Citi global team has looked at some unique things that we did here in Korea and taken them as best practices to be applied in other countries.

What are key sectors that Citibank is going to focus on in the near future along with digital banking?

Still, there are some people who see the change as a way of downsizing or a prelude to leaving Korea. And the labor union is even threatening a full strike and filed an injunction to nullify the plan to reduce branch networks. How can Citibank ease tensions with parties that are against the move?

We are not downsizing but transforming. We are investing significantly in our new digital platforms, our new wealth management centers, iPad tools for our relationship managers, and bolstering our technology infrastructure. We opened our Banpo and Cheongdam centers in 2015 and 2016, and we will launch new wealth management centers here in our headquarters and in Dogok-dong in early July. We are not laying off any staff, but we are giving them tools so that they can visit our customers rather than making them come to the branch. We think we are bringing additional innovation for the financial industry in Korea.