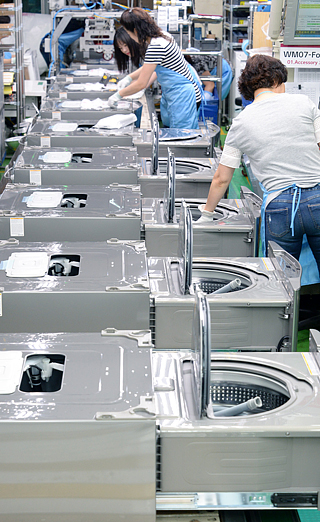 CHANGWON, South Gyeongsang - At LG Electronics’ washing machine factory in this southeastern port city, a robot busies itself with opening and closing the door of a front-loading washer. It does the test up to 10,000 times on the machine.

Another robot mimics a user holding up the door of a top-loading washer, while another room tests the performance of washing machines under extreme conditions like high heat, cold weather and moist settings to see if they can withstand the environments of various export countries.

The tests are part of LG’s efforts to make their products as flawless as possible before delivery, following a line from the home appliance giant’s chairman, Jo Seong-jin, who has vowed “never to unleash any product unless its quality is guaranteed.”

The plant, designated Changwon 2, was established 30 years ago and churns out laundry-related products from washing machines to clothes dryers for distribution both domestically and abroad. On the back of robust demand for laundry machines, the facility has seen its annual production volume grow tenfold from 500,000 to five million over the past three decades.

LG was able to accommodate the higher production without building another factory by raising its automation ratio to as high as 60 percent, meaning humans are involved in 40 percent of the process. Now, the factory is able to churn out a machine every 11 seconds, and the costs saved from the automated system have been allocated to quality control tests.

Laundry machines have become a lucrative product segment for the company, which was the first to develop and sell a washing machine in Korea in 1969. The home appliances and air solutions division accounted for 47.9 percent of all operating profit at LG in the first three months of this year compared to 41.5 percent in home entertainment and televisions.

Electric clothes dryers have turned out to be a hit ever since the company unveiled the first of its kind in Korea last year (most Koreans still prefer air drying their laundry), which led rival Samsung to follow suit with its own dryer. Korean households are growing increasingly reluctant to air dry their clothes out of concern for pollution, and now, LG’s plant is rolling out 40,000 dryers a month, up about tenfold from the same period last year. “We sell one dryer for every two washing machines these days,” said Ryu Jae-cheol, head of LG’s home appliances business.

LG expects to sell 600,000 clothes dryers this year, up six times from last year, and its market size in Korea is estimated to have already surpassed 1 trillion won ($894 million), according to industry data. Twin Wash, LG’s patented dual machine with a front-loading washer at the top and mini-washer on the bottom for small loads, had its production increase 20 percent year on year in the first five months of this year. Production of Styler, a closet that can clean clothing inside, jumped a whopping 150 percent. Due to the robust demand, production lines have been in full operation since January, conventionally an idle season.

LG, currently the country’s second-largest home appliance maker after Samsung Electronics, believes the time has come to consider home appliances as part of the household space rather than simply a product. “If you look at a washing machine and dryer as they are, there will be a limit in technological development,” said Kim Young-soo, head of the company’s research center for home appliances. “We are now preparing for the future by considering them as part of the space. We are closely monitoring how the act of laundry is transforming within the living space.”

It was this attention to trends that led LG to invent Styler, and now the company is in the midst of developing a laundry folding machine. “A series of start-ups have come up with laundry folding machines,” said Chung Jin-woo, LG’s head of washing machine R&D, “and we are bracing to unveil one that takes the form of whatever customers demand.”

Laundry folding machines currently on the market include FoldiMate, a robot about the size of a standard washer from a California-based company, and Laundroid from Japanese company Seven Dreamers.