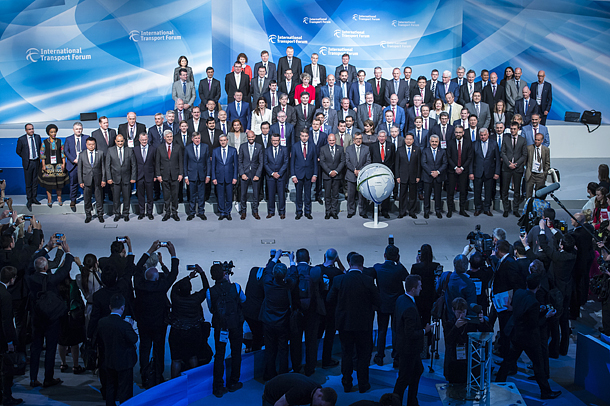 Transport ministers and their delegations from member countries of the International Transport Forum pose for a photo after the ministerial session held Thursday at the Congress Center Leipzig in Germany. [INTERNATIONAL TRANSPORT FORUM]

LEIPZIG, Germany - With the world heading toward an age of driverless trucks and mass carpooling, policy makers from around the globe gathered here in this east German city to discuss the regulatory framework for digitized transportation at the OECD’s International Transport Forum (ITF) from May 31 to June 2.

Over 1,300 transport ministers, industry officials and leaders of international organizations from 80 countries attended the 10th annual forum on the theme “Governance of Transportation.” The ITF is currently the world’s largest forum dedicated to improving global transport and underlying policies. There are 59 member countries counting Kazakhstan and United Arab Emirates, which both joined this year.

The Korean delegation included Lee Chang-woon, president of the government-run Korea Transport Institute; Oh Jae-hak, the institute’s vice president; and Kim Young-tae, head of transport policy coordination at the Korean Ministry of Land, Infrastructure and Transport, who was elected Thursday as the new secretary general of the ITF. His five-year term begins in September.

“We are entering a period of radical need for transport governance,” said Jose Viegas, current secretary general of the ITF.

Viegas said the next 10 years will see rapid development in transportation technology as exemplified by self-driving cars, digitization of transportation infrastructure and growing consumer preference for ride-sharing.

“This is a big challenge for policy making, and governance must be better,” he said.

The forum began with a discussion of how driverless trucks might reshape the future of freight transport. The vehicles have the potential to save companies a lot of money because the lower emissions and safer roads could enhance productivity, according to a study conducted by the ITF with three other organizations, but they could also cost drivers their jobs. There is also the remaining problem of liability in case a driverless car gets into an accident.

“Our analysis suggests that a reduction in operating costs from adopting driverless trucks is possible in the order of 30 percent with today’s costs,” the study noted. “But automated trucks could reduce the demand for drivers by 50 to 70 percent in the U.S. and Europe by 2030.” 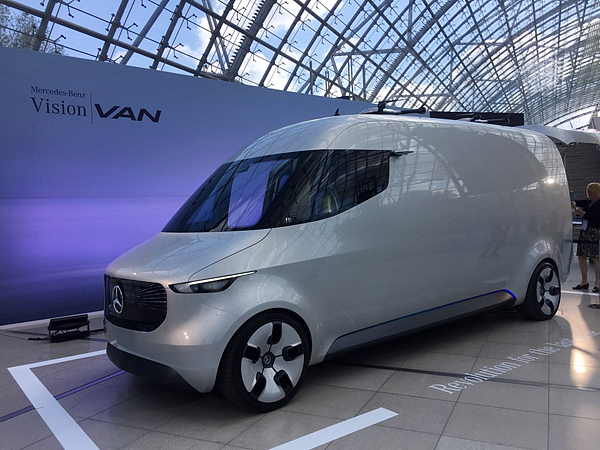 A prototype of Mercedes-Benz’s Vision Van, a futuristic cargo delivery van controlled by a joystick rather than a steering wheel and mounted with two drone ports on the roof for drone delivery, is displayed at the International Transport Forum held in Leipzig, Germany, from May 31 to June 2. [KIM JEE-HEE]

No country in the world has yet to allow full operation of driverless vehicles on public roads. Even though the study found that the rate of crashes associated with driverless vehicles was lower than conventional vehicles, a single incident could send alarm bells because of the technology’s newness and questions of liability.

“We need international standards, legislation and processes to obtain exemptions from road rules that are appropriate for self-driving trucks,” said Erik Jonnaert, secretary general of the European Automobile Manufacturers’ Association, which was one of the groups that conducted the study. “Otherwise, we risk having a patchwork of rules and regulations which could hinder manufacturers and road users from investing in automated vehicles.”

The delegates’ overall consensus at the forum was the need to make the transition process smooth for all stakeholders.

“The first feedback I want to give to policy makers is that make sure we have educational programs that will bring up the talent we need to face the big challenge,” said Lorent Troger, president of Bombardier Transportation, one of world’s largest plane and train makers.

“Regulation needs to keep up and not find itself facing phenomenon they don’t quite know how to deal with,” said Thoomas Illves, former president of Estonia.

Aside from autonomous driving, another big topic in future transport was the so-called shared economy in which peer-to-peer exchange is the predominant business model.

“Those business models have provided convenience to users and opportunities to companies, but at the same time they have become quite a shock to conventional industries,” said Li Xiaopeng, China’s transport minister.

“Sharing bicycles as a business model is developing significantly in China because it is extremely convenient for consumers,” Li said. “However, the rapid development has also meant that there are many irregular activities, for example parking bicycles on the side of the road.”

In China, the government is trying the work through the issues through public consultations, issuing guidance notes for businesses and incorporating public feedback in the notes, Li said.

Korea faces similar difficulties with emerging business models based on the sharing economy. Ride-hailing app Uber, which made a brash initial entry into the local market, is currently not allowed to operate. Stakeholders in government, consumer groups, taxi companies and automakers are still hammering out questions about the service’s legality.

“I think a country’s policy decision relies a lot on where their priority is,” said Oh of the Korea Transport Institute. “For instance, in the United States, their policies weigh more on innovation and market competition while Korea focuses more on social stabilization.”

The debate is expected to pick up steam as Korea has been named a co-host of the ITF starting July 2018 and will host the 2019 International Transport Forum. The opportunities will give Korean policy makers and industry players the change to share knowledge with global figures regarding worldwide trends in transport. Government officials are also looking forward to promoting Korea’s public transport and road infrastructure.

“We are expecting chances will increase for the Korean government and businesses to expand their presence in the world’s transport economies through the forum,” said Lee, head of the Korean research institute.

Although Korea is co-hosting the forum, it will still be held in Leipzig. The co-host this year was Mexico and next year’s will be Latvia.