Renault Samsung plans to add 200 to its payroll

Renault Samsung plans to add 200 to its payroll 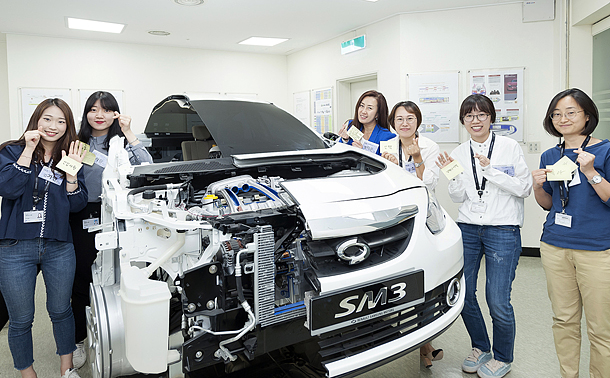 Renault Samsung Motors will hire 200 people this year, the highest number of new employees since 2012. The company said 30 percent of the new employees will be women and beneficiaries of the company’s female-empowering program, “Women@Renault,” where they receive diverse mentoring and lectures on female leadership. [RENAULT SAMSUNG MOTORS]

Renault Samsung Motors said it plans to hire 200 employees this year, its largest number since 2012 amid the administration of Moon Jae-in’s determined initiative to resolve the high unemployment rate in Korea.

The automaker said Sunday it will hire 120 more people in the latter half of this year after already hiring 79, as of May. The 200 people will make up 4 percent of the entire executives and staff members of Renault Samsung.

“In line with the new government’s employment policy, we plan to hire 120 people for research, administrative and manufacturing departments in the latter half,” the company said in a statement.

The Korean unit of French auto giant Renault Group has been shy about adding new employees since 2012 when it experienced a management crisis. In 2011, Renault Samsung had an operating deficit of 214.9 billion won ($192 million), followed by a 172 billion won one in 2012.

The company didn’t hire from 2012 to 2014. It even had a personnel reduction of some 800 employees, which was 20 percent of the entire staff at the time.

Once production and sales recovered, the company resumed hiring in 2015, when it added 22 people.

Last year, it hired 100 on the back of improved sales performance. It recorded an operating profit of 417.5 billion won, a 6.7 percent year-on-year growth.

From January to May this year the company sold 43,882 units of cars, which is a 21.4 percent growth compared to the same period last year.

The automotive company also said 30 percent of the new workforce will be female and will go through an empowering program labeled “Women@Renault,” in which the company offers diverse mentoring and leadership classes and discussion sessions for the female workforce.