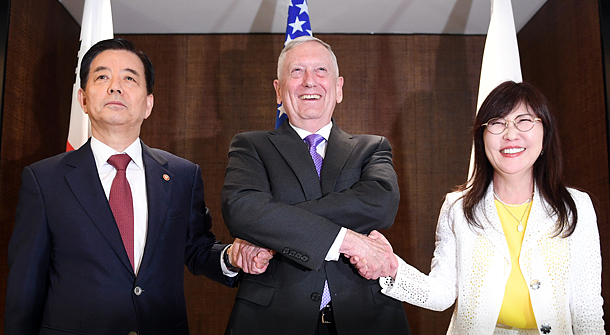 South Korean Defense Minister Han Min-koo relayed the comment to reporters in Singapore after a bilateral meeting with Mattis on the sidelines of the Shang-ri La Dialogue. Mattis did not speak to reporters.

“I told him that the Korean government’s measure on Thaad was entirely domestic,” Han said, referring to the Terminal High Altitude Area Defense system, “and that by no means are we trying to change our original decision [to deploy the missile shield] or convey a different message to the United States.”

Seoul will “solve” the issue based on the “spirit of the Korean-U.S. alliance,” Han told Mattis.

Asked whether he elaborated to Mattis on the domestic issues that unfolded last week, Han said he did not, adding he stuck to the agenda outlined by the Moon Blue House.

Moon surprised the local media last week when his office said Tuesday that four Thaad launchers were “clandestinely brought in and stored in Korea” without his notice, prompting the president to order a thorough investigation into the delivery procedure.

Without disclosing the arrival date, the Defense Ministry scrambled to announce that it reported the additional launchers to Moon’s aides in a face-to-face briefing on June 2, only to have the Blue House denying the statement shortly afterward.

Han and Kim Kwan-jin, former head of the National Security Office, were questioned last Wednesday on whether they intentionally withheld the information from Moon to speed through the deployment process. On Thursday, the Blue House said the government will conduct a full-scale environmental study on Thaad’s deployment in Seongju County, North Gyeongsang. Chung Eui-yong, head of the National Security Office, said Thaad’s complete deployment “may take more time than originally planned,” but said he couldn’t predict exactly by how long.

Seoul and Washington agreed last year, when President Park Geun-hye was president, that the deployment would be completed by the end of 2017. When asked in Singapore Saturday whether he told Chung about the four launchers on May 28 when they had lunch together, Han cited a phrase from an old Korean poem, which roughly translates as “a lot of talk leads to controversy, so I’ll just keep silent.”

Han and Japanese Defense Minister Tomomi Inada discussed military cooperation in a separate bilateral meeting as well. Inada reportedly stressed to Han that the 2015 Korea-Japan comfort women agreement, also signed in the former Park Geun-hye administration, was “irreversible” and that “Japan thinks it has fulfilled its role and obligation.”

Moon had told Japanese Prime Minister Shinzo Abe in their first phone call on May 11 that it was “the reality” that “most” South Koreans do not accept the agreement.

Discussions for a bilateral ministers’ meeting between Han and his Chinese counterpart had been ongoing, but the two sides did not meet for reasons that remain unclear.

In his keynote speech at the Shangri-La Dialogue, Mattis called North Korea “the most urgent and dangerous threat” to peace and security in the Asia-Pacific, adding that the era of strategic patience was over.

Washington “will continue to increase diplomatic and economic pressure” on Pyongyang until it “finally and permanently abandon” its nuclear and ballistic missiles program. Mattis said the U.S. was working with Seoul “transparently” to defend against the growing threats from North Korea, a comment that was seen by local critics as trying to douse the Thaad controversy.